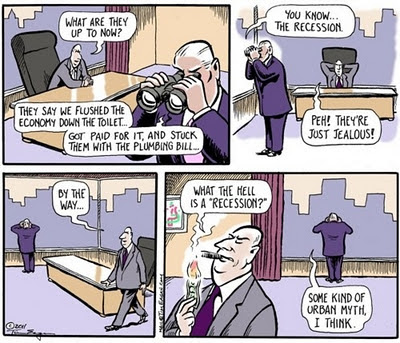 Following up on Charles Ferguson's 2010 film about the role of academic economists in propagating and protecting a financial system that was and is socially and environmentally destructive, a paper was published in the Cambridge Journal of Economics earlier this year that explored the links between academics and financial interests.

In the paper the authors focus on the conflicts of interest faced by a group of prominent financial economists. They assess 'the links among academic economists, private financial firms such as banks and hedge funds, and public financial institutions like central banks and the International Monetary Fund for a sample of 19 prestigious academic economists.' They review the statements and opinions given by these economists in newspapers and other media to assess their dual role as 'independent' experts and advocates for finance. They explore the frequency of conflicts of interest and whether the academics made these conflicts public.

Of the financial economists they chose to study, the authors found that nearly 80%, or 15 of the 19, worked with private financial institutions in some capacity. Of these 15, 13 did not disclose these connections in their academic publications. The paper deals with the situation in the US, and makes the surprising discovery that there are no standards of disclosure required of economists when they give testimony to political inquiries into banking and finance.

The authors conclude that there is 'cognitive capture' amongst a profession which is intended to offer neutral and objective commentary on economic matters. One might also call this a system of groupthink: the inability of economists who trained together and work together on what are assumed to be opposite sides of the public-private debate to challenge the hegemonic view of how banking and finance should operate. The authors propose a code of ethics for academic economists, and end with the swingeing statement:

'These same economists who mostly failed to warn of the increasing financial fragility and impending crisis also have developed a basic consensus view that favours more marketbased reforms and relatively less government regulation as a way of preventing future financial meltdowns. . . It was this crisis and similar ‘neoliberal’ understandings of economic theory, combined, in all likelihood, with
continuing material conflicts of interest for some economists, that led to loud, destructive voices for austerity. The voices of the rentier interests can be heard loud and clear in this call.'
. Tweet
Posted by Molly at 09:43