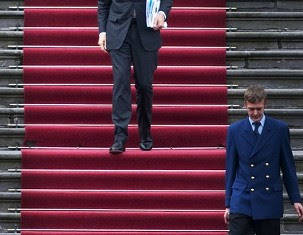 By my reckoning the Dutch government is the fifth European government to fall as a direct result of the financial crisis, the other five being governments in Iceland, Ireland, Greece, and Italy. Prime Minister Mark Rutte led a coalition government and relied on the support of the charismatic leader of the populist and nationalist Freedom Party Geert Wilders. The latter refused to accept the latest round of austerity cuts and so withdrew support.

Politicians in the Netherlands are caught between two impossible and contradictory forces. On the one hand they are one of the few governments for which it is still realistic, and whose economy still makes it possible, to meet the strict deficit rules of the European Commission. The Netherlands Central Planning Bureau estimates that the deficit will rise to 4.7%, well above the 3% rule, and so further cuts are required. Meanwhile, unlike in the UK, voters in Holland have the ability to choose politicians who will resist these cuts, no matter how unsavoury their other policies, and hence the austerity necessary to meet EU rules cannot be forced through.

I am reminded of George Galloway's coarse yet appealing comparison of British politics to a 'three-cheeked backside'. It is precisely the point of our first-past-the-post electoral system to prevent the sort of fracturing of politics we are seeing now in many European countries, where voters lose faith in the orthodox, consensual politicians of the centre, leading to polarisation and growing support for charismatic politicians from the extremes. In Britain we are lucky that we only have the relatively harmless Galloway: across Europe we can witness a worrying pattern of electorates turning to demagogues of right and left to avoid the harshness of the consensus.

If the Netherlands is in economic trouble it is clear that no European country is safe. This, I assume, is why we are finally hearing some serious debate about whether cutting, cutting and cutting again is the best way to deal with an economic crisis. Even those in the financial markets, who lobbied for the deficit rules and bid up the cost of government borrowing in one European country after another, are beginning to feel nervous. After all, stable legal and political systems are essential to their profit-making activities. But whether their short-termist destabilisation of whole national economies and a whole currency area can be reversed once they see its risks to their own positions remains to be seen.
. Tweet
Posted by Molly at 07:29