A Matter of Life and Death

The contraceptive pill was developed in 1952 and will celebrate its half-century this year. Becoming widely prescribed through the 1960s, it offered women an escape from the fear of constant pregnancy, and its dangerous consequences. But the discovery of synthetic female hormones had other consequences. Women who did not wish to have their monthly period at inconvenient times were advised that they could take the pill continually, removing their natural cycle altogether. While this removed the inconvenience of pain and blood during high days and holidays it also removed from women their particular connection with natural cycles, whether of the moon or the seasons, which many women report are closely related to their menstrual cycle. In other times and cultures this connection is a source of pride and even reverence.

As a result of their ability to manage their cycles of fertility and child-bearing through the use of artificial hormones women have been able to become the equals of men in the labour-market. They have no need to take extended periods away from work to raise their children and no longer ‘suffer’ the tiredness, irritability and pain that a menstrual cycle frequently involves. The medical model of health has enabled them to become the equals of men, but it has detached them from their own bodies and from their place in the natural world.

As women who had taken synthetic hormones during their youth reached the age of menopause they were confronted with a dilemma: the body that had been medically managed now reasserted itself. Without any experience of the natural rhythms and changes of their wombs they were unable to cope with the stress of the ending of the system of menstruation, which may have become distorted by long years of consumption of artificial hormones. 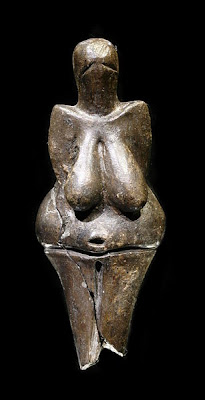 Those who undertook to move through menopause to their phase with lower levels of oestrogen and progesterone found that their skin became more flexible and they gained weight, especially at the waist. This did not conform to contemporary standards of physical beauty. Women who had learned that modern medicine could offer, in the words of a German pharmaceutical company, ‘a better life’ turned to their doctors, who began prescribing synthetic hormones in the form of HRT: hormone replacement therapy. Initially described as a temporary ‘treatment’ for the medical problem of hormone loss, HRT is now routinely continued for many years, offering women the ability to appear young for longer. As the image to the right of the Dolní Věstonice Venus demonstrates, these standards of beauty are not fixed. I offer her as a role model for the post-menopausal woman.

A whole generation of women has now travelled through the fertile period of their life-cycle without any experience of their natural hormone cycle. This has enabled them to enter board-rooms and win prizes while still spending quality time with their one or two children. It has prevented them from experiencing the wisdom of their bodies, and the fundamental connection with natural systems and cycles that was traditionally the unique gift of their sex. I should stress immediately that I am not suggesting that anything is gained through the early deaths of thousands of women as a result of uncontrolled childbirth, but I am questioning the assumption of modern medicine, and the men who have been the inventors and developers of artificial hormones, that medical management of female menstrual cycles can be undertaken without any consideration of its social, cultural and spiritual cost.
. Tweet
Posted by Molly at 08:08