The Shop That Ben Built 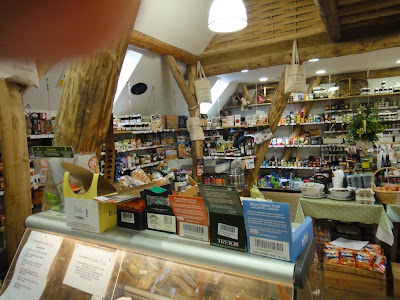 It brought me great hope that the most popular house ever built on TV's Grand Designs programme was Ben Law's woodland home. This seems to me the epitome of bioregional living: borrowing to meet your needs from thelocal natural environment. While searching for images to cheer up my book I found out that he has also built a beautiful shop call Lodsworth Larder. Like the growth in farmers' markets, the popularity of this shop, which I hope is stocked with local produce, indicates that the self-reliant communities built on strong local identities that a bioregional economy would entail are appealing, even to those who find out about them from the internet.

Amongst greens nothing raises tempers more than discussions about consumption, which are often held defensively and with large amounts of guilt flying about. I think this is because consumption is related to our identity, and we make our identities in relationship with others. We might think of the human need for identity within community as one of needing to ‘know your place’. In modern human communities this has come to mean knowing your place within a hierarchy, in a system based on power, a power you generally express through the acquisition of money and its use in a process of competitive consumption.

In a bioregional economy identity would also be about knowing your place, but in the real sense of experiencing your local environment through your consumption of local foods and products made from natural materials. In such an economy we would all need to have a role in production, and so we would all come to understand at least one aspect of the natural world very intimately. Our relationships with each other would be mediated through our varying skills and knowledge of the resources and species we jointly depend on for our livelihoods.

The bioregional economy is primarily a local economy, and so our identities would be based more strongly on local products and environments and less on the disconnected global identities which are costly in energy and resources, and also seem to bring little true satisfaction. In redefining identity as relational I believe we could substitute strong and pro-ecological identities for the destructive identities of the global shopping-mall. Instead of going shopping we might aspire to what David Abram describes as ‘the respectful, mutual relations that must be practiced in relation to other animals, plants, and the land itself, in order to ensure one’s own health and to preserve the well-being of the human community.’ (The Spell of the Sensous, p. 121)
. Tweet
Posted by Molly at 14:48