I was delighted to spend Wednesday morning this week at a conference on the subject of Peak Money organised by the Transition Network. Economics has been a key theme of Transition since the beginning. Useful outcomes have been the book on Local Money by Pete North and the economics content of the Transition Timeline book by Shaun Chamberlain. Both are available from Green Books.

I tried to fit into the 'transition culture', although that isn't always easy for me, since my motivation is for political action as much as local practice, and the discomfort some of the transitioners feel for this sort of critique is difficult for me at times. I seem to become cast in the role of angry politico, always taking a critical position. While I like to reframe myself as the grit in the oyster, it doesn't always make for an enjoyable exchange.

I used my time on Wednesday to share some of the political-economy background to the question of how Transition Towns should deal with the economic crisis, focusing on the question 'Why waste a good crisis?' I feel that we are wasting this crisis. The reality is that only the 2008 Recession managed to successfully reduce UK CO2 emissions, which makes our point that tackling the growth imperative of the capitalist economy is vital to ensuring an adequate response to climate change. 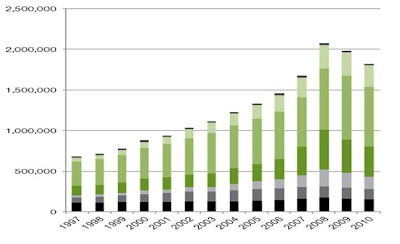 I also felt bound to question the idea of 'peak money', which I find unhelpful in spite of the slide in Tony Greenham's presentation which was fairly suggestive of a peak curve for net lending by UK banks. My concern about the concept is that it draws a parallel between a natural, non-renewable resource, whose exhaustion is inevitable, with a socially constructed tool that we can change at will. Since much of the business of economics is precisely about creating abstractions, imbuing them with power, and then using them to acquire resources, it seems to me vital that those of us building a sustainable economy should be very clear about what is real and what is subject to social or political control.

Instead of the idea of 'peak money' I suggested the idea of a resilience hierachy, moving from the least to the most abstract. In this way of framing the economy, money comes at the bottom of the hierarchy, because it is highly abstract and (as somebody once said) you cannot eat it. Fossil fuels might be somewhere in the middle: real but enhaustible. At the top of my hierarchy will always be land, the sole and eternal source of our support. To place land back at the heart of economics must be the most important task of a green economist.
. Tweet
Posted by Molly at 10:18