Do Not Structurally Adjust Your Mindset 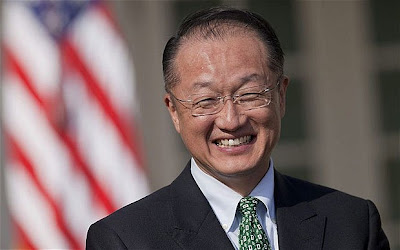 I notice that I've been averting my gaze for a while from the disaster that is political economy in 2012. I think perhaps I have just said everything I can say and become depressed at the supine nature of 'public opinion'. How can it be that the majority of populations in countries across the well-educated, sophisticated world of Western Europe are accepting the trashing of the public sectors their parents and grandparents fought so hard for? How have the financiers and their pet politicians managed to pull off this amazing coup? If you still have the energy for convince your austerity-loving friends about the Big Lie, then you will find the deficit-myth website a helpful ally.

I find something ironic in the fact that the leadership of the World Bank was contested between Nigerian finance expert Ngozi Okonjo-Iweala and Jim Yong Kim, who looks like he might be from some country other than the US but actually isn't, just at the time when the focus of the Bank's attention is shifting from the traditional majority-world victims, to a new range of suckers in the more temperate parts of the globe. With Obama's backing Kim was always going to be laughing all the way to the Bank.

The purpose of a structural adjustment programme and an austerity programme is essentially the same. Both grow out of debts taken on by governments without the conscious consent of their peoples for reasons that benefit a tiny minority. Both result in cuts to public services or social programmes that the vulnerable depend on. Both ensure that, through high levels of public debt, the wealth of nations is extracted by corporate financiers. The policy that was invented in Africa and tested in Latin America is now being imposed in Europe.

The Bretton Woods project reminds us that the BRICS are forging a new path to an economic future that rejects the elite, neoliberal, expropriative economy of the 20th century. The battle is taking place between the global institutions, with the IMF and World Bank sticking to the Washington consensus, while UNCTAD and UNESCO take the part of the poor. Obama may have kept control of the World Bank, but the world's peoples need to find solidarity in rejecting its destructive policies. The similarities between austerity for the rich and structural adjustment for the poor should help us to build this solidarity.
. Tweet
Posted by Molly at 07:45