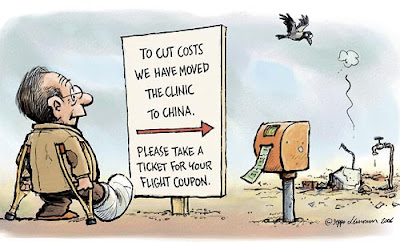 What do the scandals at Southern Cross and News Corpse have in common? They are being treated as separate news stories and yet they make the case, a case that has been growing in strength since the financial disasters that began in 2008, that even on its own terms the market has failed. The failure that is being demonstrated in this case is the failure of the market to know its limits.

It is most unfortunate for the coalition that they have chosen this day to launch their white paper on opening up the provision of public services. For while they seek to imply the involvement of well-meaning middle-aged ladies who will provide better services for less money, the reality is that they will attract the market wolves seeking a profit.

This was the reality of Southern Cross, which picked up care homes cheap from local authorities who had grown tired of their responsibilities. It then sold these assets to venture capitalists and others to release the capital to pay to its shareholders. The value was extracted at that point, so the future progress of the company was presumably of less concern.

Government cuts led to a worrying reduction in budgets for care, meaning that the financial projections about occupancy went awry, the business model failed, and the company folded. It is a classic case of making money during the boom and abandoning responsibilities when the going gets tough. Why should we expect private firms to do otherwise? This is how they are programmed. But given that we know that, should we really be allowing them into vital areas of our lives like health, education and care?

The murky Murdoch affair raises other, but related, questions of public interest. Here we are concerned with the pluralism of the press and the freedom of manoeuvre of our elected representatives. The fact that these cannot be safeguarded in a free market explains why democracies introduce media regulation. A national newspaper or major TV channel is not a business like any other: it is a public service and so should be expected to be subject to greater political control.

The unseemly haste with which Jeremy Hunt is now acting to block the buyout of BSkyB, which he had clearly signalled he would have approved (in fact, why else was Vince Cable removed from the decision-making?) is an attempt to divert attention from the deep entanglements between both Labour and the Tories and the corrupt Australian moghul. But the real questions, about how far we can allow an amoral and profit-driven market to extent its tentacles, remain unasked.
. Tweet
Posted by Molly at 08:45