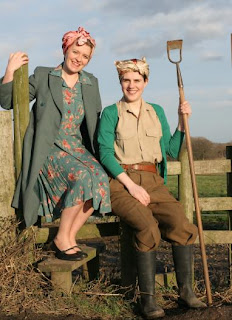 When systems of industrial production burst onto the British landscape in the 18th century they represented a break with a timeless pattern of social and economic life: it is this fundamental change in the relationship between people, their land and their systems of provisioning that has led to this process being termed a 'revolution'. In the 250 years since the advent of industrialism this system has spread geographically and across the productive sectors. It has brought extraordinary technological innovation paralleled by unimaginable improvements in lifestyle and longevity. While the yields of this system have been apparent and immediate, the costs have been more diffuse and have taken longer to express themselves.

In the book I am writing about the Bioregional Economy I am considering how the relationships between employer and employed, and between labourers and the resources they work with, changed as agricultural production gave way to industrial production. The complex social networks that typified production in rural communities that had changed little since feudal times were replaced by market exchanges.

The achievement of an equal and sustainable society raises questions relating to 'provisioning', and economy that enables people to meet their needs directly, without feeling constrained by the strait-jacket of the market ideology. This may be considered to be a utopian project, but I would rather concur with Polanyi in his suggestion that it is in fact the ideology of the free marketeer that is utopian, in fact not merely utopian but dangerously so:

'the origins of the cataclysm [the Second World War] lay in the utopian endeavor of economic liberalism to set up a self-regulating market system. Such a thesis seems to invest that system with almost mythical faculties; it implies no less than that the balance of power, the gold standard, and the liberal state, these fundamentals of the civilization of the nineteenth century were, in the last resort, shaped in one common matrix, the self-regulating market.' (Polanyi, The Great Transformation, p. 31)

While the precise forms of the institutions has changed since Polanyi wrote his masterpiece in 1944, his central point remains: that they all collaborated in the underpinning of a unified system with the market economy at its heart. Like Polanyi, I would challenge this totalitarian approach to economic life.
. Tweet
Posted by Molly at 17:26