If you want to save the species, get political 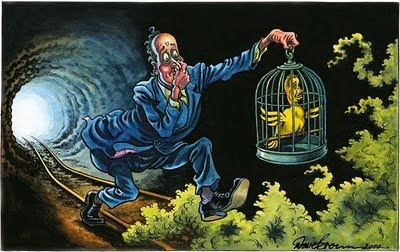 Is has become increasingly apparent during the past couple of years there is an inability amongst a wide range of people in politics and media to think about more than one issue at the same time. Since the financial crisis and the advent of deficit-vision any thought of showing concern for the environment has entirely evaporated.

In a sad report on the Transition Network website we learn the consequences of a shift in one administration from fluffy Lib Dem to market-hard Tories (that of Somerset County Council). The article quotes the authority's new hardline budget strategy: 'some services will be stopped completely e.g. climate change work, work on renewable energy, natural environment policy and delivery'. They have also sacked their Climate Change Officer. In the world of deficit-think, the environment is entirely forgotten.

The absence of any analysis around political economy was one of the criticisms most frequently made in the early days of the Transition movement, especially by academic commentators. Rupert Read, for example, made the case some three years ago that Transition Towns play a valuable demonstration role but cannot offer a sufficient response without taking politics seriously. Rob gave a spirited defence of the need for unleashing the powers of positive thinking and creative community action.

Like Rupert, and many other green politicians, I have been engaged in Transition initiatives from the start. And from the start I was well aware that any political support demonstrated by 'grey' parties who have always been adherents of the prevailing political and economic culture, whose existence relies on the power structure that is killing the planet, could only ever be partial and opportunistic. What has happened in Somerset appears to validate the view that inspiration, hard work and bright ideas, while important, are insufficient without political analysis, strategy and action.
. Tweet
Posted by Molly at 08:37