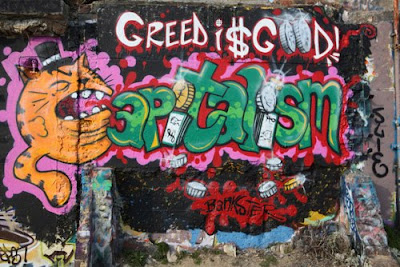 Where is George Orwell when we need him most? The lasting contribution of his writing is not his lucid and baldly honest descriptions of historical events, valuable though these are, but his nailing of the operating mechanisms of a totalitarian state, whether of the right or of the left. While Big Brother and the Big Society seem locked in some process of intellectual dialectic, the concept of doublethink thrives in Cameron's Britain.

Let's think, for a while, about the Independent Commission on Banking. Who precisely is it supposed to be independent of? Given that it was established in the wake of the greatest financial collapse history, caused by the reckless behaviour of privately owned and profit-driven banks, one might hope that it would be independent of the finance sector.

This is far from the case. In fact, the most independent member is probably Martin Wolf, who has made his living as a financial jourjnalist. Hence he is entirely reliant for stories on the sector from which he is supposed to be independent. John Vickers himself was Chief Economist at the Bank of England, Martin Taylor is a former Chief Executive of Barclays, while Bill Winters had a similar post with J P Morgan until 2010.

The justification for this make-up is presumably based on expertise, in line with the oft-repeated and highly patronising thought that we the people are simply not smart enough to understand what goes on in the arcane world of finance. Like latter-day alchemists, the financiers make something from nothing, and then make things of real value disappear. Such knowledge is far too dangerous to be made available to the unwashed masses.

I have an alternative proposal: a truly independent banking commission. This would be made up of five ordinary people, drawn by lot in a process akin to the jury system. It would be chaired by Joanna Lumley, who would be responsible for reporting its findings to the general public. It could take evidence from a range of people: financiers, politicians and journalists, but also those who have been on the rough end of the miracle of finance: small businesses owners who cannot raise finance, single mums who cannot feed their children, and dissident economists of course.

The purpose of the commission will be to create the general principles within which technocrats can then make policy. If a derivative or other 'financial product' cannot be explained to them in a convincing manner, then they will be duty bound to reject its role in the finance world of the future. If we are truly to live in a democracy then finance must be required to submit to such rules, while the people, in an equally painful process, must take responsibility for understanding the financial system that is such a vital part of their lives.

Last night I went to watch Inside Job with some friends. I was frankly disappointed by the failure to nail the nature of the coup by the financial sector, which has effectively taken over the US government. The film was also short on remedies, ending on a platitudinous quotation about how the struggle to regulate finance 'will not be easy'. Hardly an insightful observation. My friend the Green Bean Counter has a better idea. Why don't we hire Matt Damon for one last vengeful performance, where he outwits the bankers and destroys their empire by force. Hence the title of this post.
. Tweet
Posted by Molly at 09:36