A bouquet for the BRICS 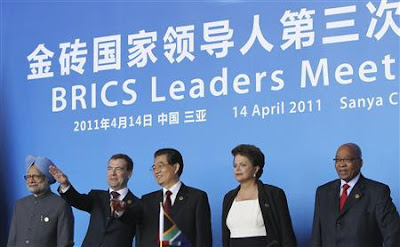 The movement in economic power towards the populous and productive nations of Asia, and the resource-rich countries of Brazil and Russia, has been obvious. The Western nations' strategy of extracting an unfair share of the value of this work and taking resources that do not belong to them through the trade-and-currency system is finally being challenged politically.

The BRICs, once a theoretical grouping, are beginning to operate like a political force. Their call for a new reserve currency to replace the US dollar as the basis of global trade is a sign of frustration with the failure of the US government to tackle the injustices in the global economy. The invitation to South Africa to join this grouping is an indication that, much more so than the G7, it is beginning to represent a global decision-making forum.

To some extent the leaders of these countries are being polite in making statements. They hold the power in the global economy and, if the UK and US fail to negotiate, it can only be a question of time before our currencies are simply sidelined. At present the call is for the use of special drawing rights as a global reserve; it might just as well be a currency set up in common between the BRICs countries and their allies, sidelining entirely the Western countries that have dominated the global economy through power rather than performance since the end of the World War II.
. Tweet
Posted by Molly at 08:57