Bringing Economies Down to Earth 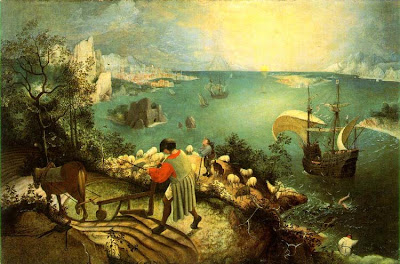 What was so disturbing about the recent history of Iceland, and in this it merely represents a microcosm of the globalised economy, is the way that there needed to be no apparent connection between the size of the real economy and the size of the financial economy. Nominally Icelandic businesses could use each other’s collateral to borrow many times more than the country where they were based was worth. But the unravelling of the story demonstrates that this disconnect is more apparent than real.

When the financial intermediaries can no longer borrow the credit consider that the government of the country where the bank is registered has a duty to take on the losses and repay the creditors. Hence when British depositors in Iceland’s banks lost their deposits, Prime Minister Gordon Brown immediately insisted that the Iceland government should repay, leading to a lengthy legal battle the outcome of which is still undecided.

The myth of deterritorialisation was created by the Vikings of various national origins who had found ways to create money from thin air by the process of mutually supportive bank credit. But when the bubble burst the creditors ignored this myth and targeted national governments to support the debts that had been taken on by companies registered in their territories. Far from floating free in a globalised world without governmental authority, those seeking repayment reverted to nationally based legislative frameworks.

The legally enforceable contracts between banks and the national governments who register them are, it seems, still valid in the post-geographical world of globalisation. The lesson that was learned from the collapse of financial institutions, in Iceland and elsewhere, was that geography matters very much indeed.
And beyond the question of where the bank is registered and who should pay, comes the question of how the economic value that the money can make a claim on is to be generated.

Robert Wade has written of the Icelandic economy as Icarus, the Greek mythical hero whose hubris caused him to fly too close to the sun, and who was destroyed by his own arrogance. Following the bursting of the financial bubble in 2008, every economy that has lived through finance creation was forced to come down to earth with a bump. The apparent severing of the link between finance and the real economy was only ever apparent. Now that those who are left holding credit come to make a claim for real goods and services it is the citizens of those countries whose banks generated the artificial financial value who have to pay for it, with their work, and the resources of those countries that have to be exploited to produce those goods and services.
. Tweet
Posted by Molly at 09:04