The Future of Universities: A Rhetorical Question? 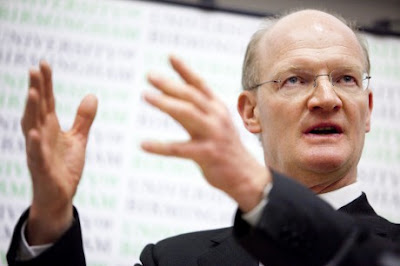 The higher education sector is giving clear evidence that the Tories are responding to their own rhetoric rather than the reality of the way a modern economy is organised. Cuts to university funding have been savage and sudden: 6% to the teaching grant and 54% to the capital grant for 2011/12. Universities are supposed to make up the shortfall through increasing fees, but these increases cannot be imposed until 2012/13, leaving a year with a massive spending gap.

These cuts are aimed particularly at teaching, penalising those universities which continue to focus on teaching rather than research and contribute to social mobility by accepting students from less wealthy backgrounds. As Sally Hunt, UCU General Secretary, put it:

'Exceptional universities that concentrate on teaching and widening participation have been told today that they are being left to scrap it out in an untried market place. In addition, institutions that focus on arts and humanities will be forced to charge higher fees to make up the shortfall when they are given the option to triple the current maximum fee to £9,000 in 2012.'

In the market for education of the government's imagining, a lower-quality university will compete on price, offering cheaper degrees to those with less money, first-generation hopefuls perhaps, rather than public-school leavers. If we were talking about shoes or beefburgers this rationale might work, but no university wants to think that its degrees or its students are second-rate. A full 57 of the 80 English universities that have so far revealed their fee structure have tripled their fees to the maximum £9000, with many more within a thousand or so of that maximum.

Universities, long the object of managerialisation, are now being treated as though they were private-sector businesses, but they are not and never can be: they face different rules and constraints. In the private sector, if you see your market share contracting you cut costs and change the quality of your product or cut output. Since standards of education are controlled by the QAA and numbers of students are fixed by government dictat, neither of these options is possible for university managers.

What we are facing in the UK's once proud university sector is a bloodbath as managers struggle to be impressively ruthless by engaging in a process of random downsizing without any sense of strategic direction. In spite of the continuing public support for higher education, courses of practical value to the country will be cut if they are not the ones favoured by students. Staff who have failed to make themselves fit for the purposes of corporate managers will be lost.

The threat posed a generation of politicians who cut their teeth under Thatcher, and imbibed market rhetoric with their mother's milk, is only now becoming clear. Their failure to understand that the public sector cannot behave like the private sector is a danger to us all.
. Tweet
Posted by Molly at 08:11