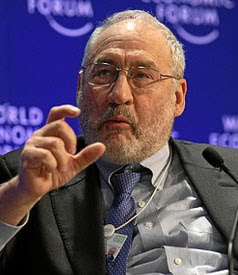 In spite of the fact that he is clearly right, and that he is in the sort of position where holding critical views could have some impact, I cannot feel warm about Joseph Stiglitz. It must be the years he spent at the World Bank drawing a fat salary while the Bank's policies caused starvation and death. Although the black mark is partially expunged by his dissent and subsequent sacking, it still recalls a bank boss who takes his large pension and then joins the Rotary Club after retirement. And of course Stiglitz has never returned his 'Nobel Prize', suggesting he still revels in the acclaim of his dubious peers.

But bitterness aside, let's enjoy his latest offering published in this month's Vanity Fair. The article begins with the commonplace and yet shocking statistic that the top 1% of US citizens take nearly a quarter of the country's income each year and own 40% of its wealth. As recently as 1986 the comparable figures were 12% and 33%. This extraction of value by the plutocrats has been bought largely at the expenses of the professionals.

There is a useful phrase in the article which I think we could make much of: 'Trickle-down economics may be a chimera, but trickle-down behaviorism is very real.' The lifestyles of the wealthy, which in an earlier age we would have considered beyond our station, are now advertised to us as something to aspire to. Such luxuries and long-haul flights and fast cars are considered as rights, and greens who suggest that they may need to be restricted are painted as killjoys if not oppressors.

Stiglitz argues rightly that the justification for the growth in inequality on the basis that wealth creators have to be rewarded so that the economy can boom, and that this additional output will benefit us all, is unsupported by evidence. What he fails to notice, and what makes the need to end the extraction of value by the wealth so urgent, is that this economic growth is actually undermining the conditions that enable any economic activity at all to take place.

This is the argument offered by the eco-socialists, their so-called 'Second Contradiction of Capitalism'. A green economist would probably find a more grounded and passionate response: the greed of the wealthy, and the economic growth it is linked to, is killing the planet and destroying all our lives.
. Tweet
Posted by Molly at 07:42