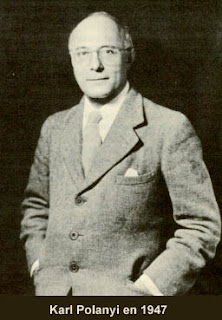 I have finally overcome my inherent thrift and bought Karl Polanyi's Great Transformation, allowing me the leisure time to consider his arguments at length during train journeys, rather than in haste before his book had to be returned to the British Library stacks in Wetherby. What I found surprised and impressed me immensely.

At the level of chat, Polanyi is discussed, dismissed even, as an 'economic historian'. This is a familiar glitch in discussion of economics, where considering long-term trends is thought to undermine the quality of your contribution. After all, it might risk allowing in the possibility that there have been alternatives to the market, even that these have dominated human history and achieved high levels of well-being.

The popular view of Polanyi is of a social historian who offered an understanding of non-market provisioning systems. The motivation for his book, however, is clearly that of political economy. He begins with two chapters on the gold standard and its role in maintaining peace in Europe in the 19th century. Far from peasant economies and mutual aid, this is a story of political intrigue and the power of global finance.

Polanyi describes four institutions that held 19th-century Europe together: the balance-of-power system, the gold standard, the self-regulating market and the liberal state. He is in no doubt about which mattered most: 'Of these institutions the gold standard proved crucial; its fall as the proximate cause of the catastrophe. By the time it failed, most of the other institutions had been sacrificed in a vain effort to save it.'

While history never repeats itself, this quotation made me ask myself which of the institutions and values we hold most dear we are willing to sacrifice to support the existing reserve currency system, and particularly the power of the dollar and the euro. The political pressure required to service the needs of finance today are ripping apart the social fabric, leading to the rise of nationalism and racism, the destruction of social services, and the waste of our skilled young people to unemployment.

Perhaps even more familiar is Polanyi's judgement on the impact on equality of the currency wars of the 1930s: 'Internally and externally alike, dwindling currenices spelled disruption. Nations found themselves separated from their neighbours, as by a chasm, while ta the same time the various strata of the population were affected in entirely different and often opposite ways. The intellectual middle class was literally pauperized; financial sharks heaped up revolting fortunes. A factor of incalculable integrating and disintegrating force had entered the scene.'

It is said that Karl Polanyi is an influence on Maurice Glasman, theorist of the self-parodying ideas of Blue Labour. In such quarters Polanyi's book appears to be used unopened, as an iconic support for mutual aid and communitarianism. But if Glasman and ilk have the influence they claim on Ed Miliband, Polanyi may soon be a name worth dropping.
. Tweet
Posted by Molly at 10:44