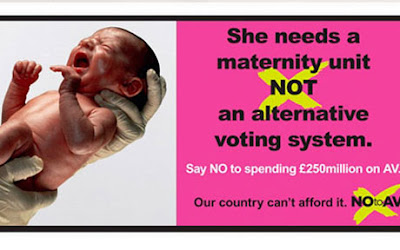 It was Terry Jones, the Python not the Koran-burning cleric, who first made me conscious of the increasingly wayward behaviour of abstract nouns. First we were launching wars on them (Terror being the foremost example) and now we share diplomatic representatives with them. David Cameron has apparently appointed an Ambassador for the Big Society. It made me wonder whether we couldn't have ambassadors for a whole range of abstract nouns and concepts. And if you're asking, mine's a pint of outrage, although the position of Irony Tsar would also appeal should it soon fall vacant.

The latest target for my roving outrage is the abysmally poor quality of the campaign over AV. I have yet to receive my 'independent' leaflet from the Electoral Commission but have been out delivering the Yes leaflets and have received a No leaflet through my door. The arguments in both are tendentious, misleading and entirely negative. How can it be that the Yes campaign can think of no better arguments in support of the case for creating genuine democracy than that it might make politicians feel more insecure and that they would consequently work harder? This has only a marginal connection with relevance and also serves to reinforce the myth that politicians are lazy.

I was, of course, predisposed to feel more negatively about the No campaign's leaflet, although the level of deceit and determination to mislead shocked even a campaigner hardened by as many political battles as I am. Meanwhile the media debate, led by the now ennobled John Reid, scraped even lower into the barrel of vintage scare-mongering by suggesting that AV would serve the interests of the BNP.

Barbara Panvel, a challenging rival for my claim to the position of Outrage Ambassador, has produced an excellent blog post detailing the funders of the No campaign, which is portrayed as a 'coalition of City billionaires, Tory peers and trades union barons backing the campaign to oppose a change in Britain’s voting system'. Barbara's judgement on the message to keep the open and simple system we current use: 'It is OPEN: to lobbying. It is SIMPLE: those with the longest purses are heard with the deepest respect.'
. Tweet
Posted by Molly at 08:53