Rage of a Porritt Spurned

What a pleasure it is to find Jonathan Porritt on rampagingly good form. In a post yesterday he bemoans the passing of the Sustainable Development Commission, of which he was formerly chair, and indeed of any commitment to sustainable development from the Condem government.

This doublespeak is becoming something of a habit with our government. We have numerous examples locally, where our MP tries to portray himself as a defender of the very local services which his government is forcing us to cut. Then we have the odious Pickles portraying the privatisation of public services as something we should feel empowered about. 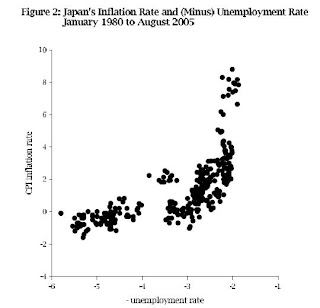 In case you cannot cope with this level of rage you may enjoy a light-hearted paper called Japan's Phillips Curve Looks Like Japan, whose only reference is a paper called 'All Meat Looks Like South America'. The Phillips Curve is a rather nasty piece of economic theory that says there is an inverse relationship between inflation and unemployment. This can be interpreted as the suggestion that we need unemployment to keep prices under control. The theory is not very well supported empirically, suggesting that its primary motivation is political.

In the paper cited,* you can see a clear relationship between the two variables in the case of Japan, but not what you might expect. As shown in the figure what we ascertain is that the datapoints produce a pretty picture of the country itself. Aw: isn't that sweet!

*Thanks to Tom Lines for sending me this link. Tweet
Posted by Molly at 14:19