The most interesting message from what was a widely trailed and rather dull budget, was the implicit view it gave of the Tories' perception of our country and its people. The announcement of an intention to make us the cheapest country in the G7 and the emphasis on the phrase 'open for business' made Osborne come across as less of a worthy guardian of the nation's finances and more of a rather desperate pimp. The graphic indicates that, even before the 2% cut in corporation tax, our rates were much lower than the other major capitalist economies. This is the explanation for our failing infrastructure and highly unequal income distribution. 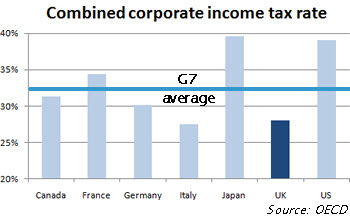 Those who gain from the budget proposals are not shy about expressing their delight, as a lengthy selection of comments on the FT website demonstrates. Entitled 'Business Speaks' it may have provide an apt title for the budget as a whole. Round 1 was the attack on citizens' incomes in last autumn's public spending review; round 2 is the sharing out of the proceeds to business bosses and their shareholders.

While the Tory action in favour of the interests of capital is true to form and unsurprising it follows the years of New Labour governments that did nothing to defend the interests of the class that party was formed to defend, but implemented policies to enhance in the share of the national product going to capital. The tax burden on individuals has increased rapidly (from £48.8bn. in 1989/90 to £109.5bn. in 2002/3 and £156.7bn. in 2008/9) while that for corporations has grown more slowly. Despite a massive growth in corporate profits during the same period the tax they paid rose from £21.5bn. in 1989/90 to £29.3bn. in 2002/3 and £44.9bn in 2008.*

And a political elite that pimps its people often pimps its environment too. So the land is opened to rape and pillage, with local development plans torn up, depriving the elected politicians who know and care about their local area of any power to resist development for the sake of profit and growth for the sake of growth. Greenbelt, habitat for rare species, valued leisure environments - none shall stand in the way of a few more points on GDP and larger profits for property developers and the construction industry. The decision to remove the need to apply for change of use when converting office buildings and shops to houses is typical of the drive for profit rather than a policy of considered economic development. The designation and auctioning of development land is another example of the heedless generation of cash.

The phrase 'race to the bottom' was revived to describe the situation where corporations rule the world and can force governments to outbid each other to cut taxes and environmental standards. There is no evidence that this improves the economic performance of countries, and it is frequently disastrous in social and environmental terms. We only have to look across the Irish Sea to see where the policy of making yourself cheap for business, the 21st century version of the putting out system perhaps, leads to. If unstable, unreliable growth, with the returns shared unequally and at the expense of social cohesion and environmental destruction are what you are looking for, then you can be sure you have the right Chancellor to provide it.