Stoicism is not Resilience 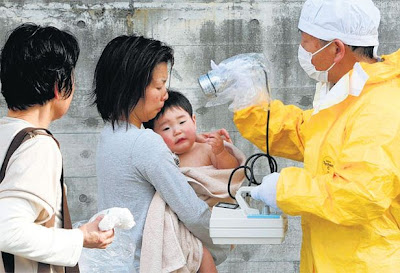 For those of us who have long been arguing that the global supermarket has led to resource insecurity and social vulnerability the situation in Japan presents itself as an unwelcome object lesson. The complex and intertwined system of a modern society, where electricity, internet, money, food and transport systems are interdependent and highly demanding of energy appears impressive until one part of the chain breaks, and then the others rapidly follow.

A natural disaster like this looks quite different in a technologically sophisticated society like Japan, from the very similar tsunami that hit the less developed areas of Indonesia and the Indian Ocean in 2004. The energy embodied in the airports, highways and rail networks in Japan is immense; while economists argue about whether Japan can afford to borrow enough to replace them, it is the energy cost of rebuilding so much complex infrastructure that is more troubling to a green economist.

The thoughtful coverage on Newsnight last night included economists suggesting that the natural catastrophes affecting Japan may be just the stimulus it needs to get back to the sort of growth path neoliberal economics expects. A new twist on the 'disaster capitalism' idea. There was no consideration of the embodied energy that has been lost in the earthquake and tsunami and the climate cost of replacing this infrastructure.

It seems exquisitely unfair that the Japanese, having been the only nation to suffer the effects of nuclear bombs, are now to become major victims of civilian nuclear power. From the forced ending of Japan's Tokugawa shogunate in 1868, through its use as a testing-ground for US nuclear aggression, through the forced imposition of the American dream during a 7-year occupation after World War II, Japan has not fared well at the hands of Western 'civilisation'.

The dignity, grace and stoicism of the people has impressed Western journalists. But stoicism is not reslience, and these people are the victims of scientific hubris as well as of natural disaster. Rather than rejoining us on the self-destructive high-energy path of consumer capitalism, is it too much to hope that these natural disasters might lead to a return by the Japanese to a path more in keeping with their indigenous Shinto way of living in balance with nature?
. Tweet
Posted by Molly at 14:25