How Much Money Has the Fed Printed? 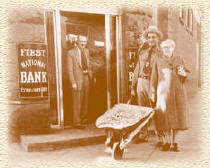 As we suffer under the cosh of the Tories' austerity, many are casting envious eyes across the Atlantic and asking whether our government could, like the US government, create money to help our economy out of the many and mutually reinforcing problems we are now facing. The answer seems to be 'no' and 'yes'.

The scale of US government money creation is staggering: according to an article published in the Post-Autistic Economics Review it amounted to $2 trillion dollars in 2009-10, with another £1 trillion coming this year. This represents approximately twice the economic value of the total annual activity in the UK over those three years. This money is being given to US financial institutions in the hope that they will lend it and thus stimulate economic activity. But as in the UK, the bankers are keeping that money to themselves, holding it as capital or paying it out in bonuses. The public is seeing no benefit from this massive money creation.

Meanwhile, internationally, the creation of dollars on such a vast scale is destabilising the whole financial system, leading to the understandable raising of currency barriers by the BRIC economies, particularly China, and the creation of a new grouping that is rejecting the continued role of the dollar as the major trading and exchange currency. China has now negotiated currency-swap agreements with Russia, India, Turkey and Nigeria. As Hudson explains:

'These problems are topped by the international repercussions that Mr. Dudley [Chairman of the New York Federal Reserve] referred to as the “limits to balance-of-payments expansion.” Cheap electronic U.S. “keyboard credit” is going abroad as banks try to earn their way out of debt by financing arbitrage gambles, glutting currency markets while depreciating the U.S. dollar. So the upshot of the Fed trying save the banks from negative equity is to flood the global economy with a glut of U.S. dollar credit, destabilizing the global financial system.'

So, to answer my initial question: could the UK follow a similar policy of quantitative easing? On the scale of the US money binge, the answer must be no, since the pound does not have the same international credibility. In addition, the policy is diplomatically unacceptable, since it is clearly unilateralist and destabilising. However, the actions of the US government do prove two things: austerity is a choice not an inevitable; and governments can and do produce money and spend it dirctly into the economy.

A policy of creating money targeting at specific sectors to stimulate the creation of jobs in pro-green areas of the economy could be exactly what we need in the UK just now. Such a programme was detailed in the Green Quantitative Easing report from Richard Murphy and Colin Hines. This would smooth our path to a lower-carbon, lower-growth future and is a strategic and forward-sighted policy to contrast with the ideological short-termism of the coalition.
. Tweet
Posted by Molly at 10:04