No Stabilisation without Escalation 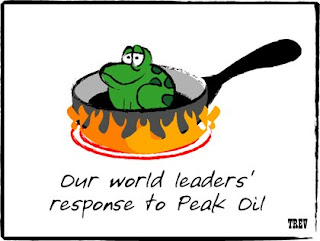 Here's something unusual: an opportunity to agree with the Tories. Media discussion has returned to the issue of the damaging results of volatility in the fuel price, a problem which affects citizens as well as businesses. Back in 2008, the Conservatives published a consultation paper on the question of using fuel taxation to stabilise the price, rather than raise revenue.

More surprisingly, the paper made reference to the need for 'stabilising the price of carbon'. This was the time when the Conservatives had changed their torch of enlightenment to a tree of sustainability and were trying to persuade us they would be the greenest government ever. Now that they are the government the link between stable fuel prices and sustainability appears to have been severed.

As I have already argued, in a long-term perspective, government would help business most by establishing a clear upward trajectory for fuel prices, making the direction of travel towards low-energy production and renewable sources of supply clear, and pushing managers towards building this in to their organisational planning.

Abandoning the link between stable fuel prices and the transition to a low-carbon economy is an example of the threadbare nature of the Tories' green clothes. But more seriously it demonstrates their failure to understand where the global economy is going. Far be it from me to provide business advice to capitalist corporations, but it doesn't take much insight to realise that relying on fossil fuels in the era of peak oil and climate change is a recipe for business failure.
. Tweet
Posted by Molly at 07:26