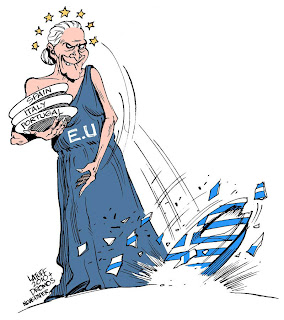 I've thought about calling this blog 'thinking the unthinkable' but I decided to use such a cliched strapline was probably itself unthinkable. Perhaps 'explaining the inexplicable' would be more appropriate. But what I am not prepared to do is repeating the unrepeatable and so, in response to a request from a friend and colleague for some guidance on the Greek situation, I am offering a tidying up and pulling together of various previous posts.

We need to begin with an understanding of the misguided euro project, which was driven by corporate interests and political ambitions and was unpopular with economists from the start. The sort of strait-jacket it imposed on countries' interest rates assumed a uniformity of economic development and social values that simply did not exist. The strictures that were entered into and are now being enforced are similar to those imposed by the gold standard in the 1930s, and so brilliantly explained by Karl Polanyi in his Great Transformation. For a more radical view of the purpose of the Euro project you might enjoy a paper by Ramón Fernández Durán called 'Mars Vs Venus, or Dollar vs Euro?'

This helps us to answer the question of whose fault it is - the financiers and corporate power-brokers who sought to increase their power and ease their extraction of surplus value. It was the poor design and inadequate debate that resulted in the tragedies now playing themselves out in Greece, for which the Greek people cannot be held accountable and should not be made to suffer. Similar arguments were made by Mary Mellor, and were posted to the blog in May 2010.

This brings us to what is to be done. Here I point to the lessons from Argentina, where a country's leaders refused to see their society destroyed and forced their creditors to the negotiating table. Politically this is the only acceptable option: a democratic decision about who gains and who loses value. In the free-for-all that is now threatened in Greece the financiers will flex their muscle while pensioners and the soon-to-be unemployed will be the losers. The tragedy not just for Greece but for the world is that similar negotiations at the global level have not been taking place and are desperately overdue if we are to preserve our democratic right to decide how our economies function.
. Tweet
Posted by Molly at 08:21