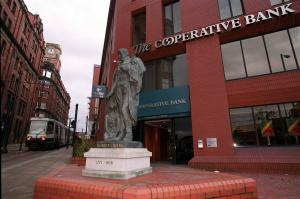 At last - something you can actually do to show your revulsion against the destructive behaviour of bankers and financial engineers. Today the Move Your Money campaign is launched. Its aim is to recreate the enthusiasm for an entirely alternative, non-capitalist economy that was typical of the early days of co-operative - beginning with the finance sector.

As Ed Mayo, Secretary-General of Co-operatives-UK says, 'Move your money is the new fair trade. It is THE campaign for our time.' So if you still have a bank account with a bank it really is time to change that. And then you can move your mortgage into the mutual sector as well.

Once you've started there is no stopping: mobile services, internet, phone, insurance: they are all available via mutual or co-operative providers. With the launch of Co-operative Energy you can sign up to electricity and gas tariffs that don't line the pockets of any shareholders. And of course there have always been The Co-operative food shops and John Lewis for household goods.

This is an important step on the road to defeating capitalism: not by a revolution but by just deciding we don't want to play along any more and using the alternative, co-operative economy that has always been there.
. Tweet
Posted by Molly at 11:19