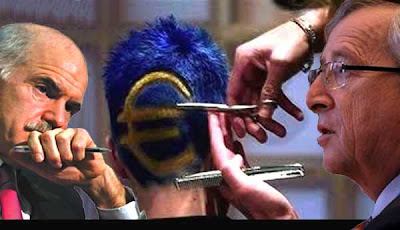 When is a default not a default? When to call it that might threaten the interests of significant financial players. Greece has arrived at the state of a default that may not speak its name. The announcement that it will add 'collective action clauses' to its sovereign debt removes any question-mark over whether a default is actually taking place. Voluntary agreement by lenders could be called by some other name, but when you explicitly refuse to pay back in full you are certainly in a state of default.

The danger in Greece's default is that it has automatic consequences. These arise as a result of a system of credit-default swaps (CDSs) which Greece's creditors took out to hedge their bets in a risky market. This piece of obfuscatory jargon hides the real nature of a CDS, which is an elaborate financial insurance scheme. Just as the creation of money through banking relies on the acceptance of non-existent money from one institution by the next, so the financial institutions insured each other against the absurd risks they were taking on in lending money to countries, and individuals, who could never afford to pay it back. In this way interconnections were built up that guaranteed that the failure of one would be the failure of all—and incidentally made it inevitable that if we are to solve the problem of any one country or bank we must radically redesign the whole system.

The Greek default has been more extreme than even the most pessimistic observers expected. Creditors are expected to face 65% to 70% losses on their loans, and the new conditions mean that the Greek government will not negotiate but will impose these terms. But the way that they have, without any system of accountability, sucked workers and savers into the web of greed and deceit means that it will be us, rather than bank shareholders, who will pay for the Greek default.
. Tweet
Posted by Molly at 09:59