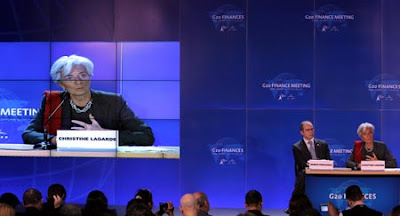 This is the title of a new book published in Czech and it encapsulates an important thought given the extraordinary contortions we are witnessing at the G20 and amongst Eurozone leaders. It has been clear for several years that the money created during the banking boom was produced from thin air and could never be repaid, yet those amongst the elite who nominally hold this value are refusing to relinquish it now that their bubble has burst.

Initially, the extorted money from governments to pour into the debt black holes and maintain the value of their assets. This merely had the consequence of threatining the financial stability of the countries involved, in the case of Greece and possibly Portugal and Spain to the extent of bankrupting those countries. Now that more of the debts are coming home to roost the asset-holders are seeking another round of welfare payments from the 99% who are suffering the austerity cuts their profligacy has caused. No wonder that European capitals are filled with angry demonstrators.

The impasse is the result of a struggle amongst capitalist elites. On the one side we have the US, Christine Lagarde, the US puppet at the IMF, and the UK, the traditional US poodle. This group seeks to maintain the power of the dollar in the global financial system. On the other side the rising economies of China, Brazil, India and Russia are proposing a greater role for the IMF, which should no longer respond solely to US dictat.

Without a strengthening of the IMF bailout fund money must be found from the Eurozone countries to provide money to support European banks when their Greek assets are obliterated, some time later this month. Otherwise some, or perhaps all, the European banks and a large number of its countries, will become bankrupt. If European citizens cannot be persuaded to accept the use of public money in this way, then control of European and US financial institutions may have to be ceded to the sovereign wealth funds of the BRIC economies - the only group capable for finding additional money to invest.

Meanwhile the people of the world are calling time on an economic system that maintains the value of the corrupt assets of a tiny elite while the vast majority of the world's people suffer. The inchoate mass of political opposition camped around the world's capitals is waiting for a political leadership with the courage to proposed a new economic system, and for a media prepared to break the strangledhold of its pro-capitalist owners.
. Tweet
Posted by Molly at 10:10