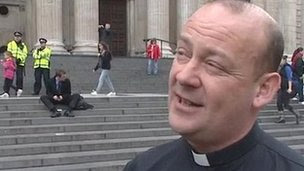 The resignation of Giles Fraser, Canon Chancellor of St. Paul's Cathedral, is a clear sign that things may be about to get rather nasty for the economic justice activists claiming the church's sanctuary in the heart of the City of London. From the start he had welcomed their protest and made them welcome inside the church. The church hierarchy decided to to close the church to put pressure on the protestors - a decision that seriously backfired. Once it closed its doors a conflict seemed inevitable and Giles Fraser has been the casualty.

The worrying signs began with a news story, emanating from the cathedral, that it was losing £20,000 per day because of the closure. This immediately raised several questions: how could a house of God be so lucrative? Why had they voluntarily closed their doors to ensure that this income would be lost? And perhaps most important of all: what would Jesus have thought of all this?

Most historic churches now include a 'gift shop' which sells a range of tat to enhance church funds. While live chickens no longer change hands and the trade is always seemly and made in hushed, respectful voices, you still can't help thinking of Jesus overturning the tables of the money-lenders and questioning what should have been a house of prayer becoming a den of thieves.

This is a shame, because the various parts of the Christian church have a wonderful reputation for taking practical steps towards greater social justice. The fair trade movement arose originally from a Christian inspiration and grew up through the sale of coffee and tea on stalls at the back of churches. A more direct attack on Mammon was found in the work of the Jubilee 2000 movement for the cancellation of debt owed by poor countries, as well as the work of the Christian Council for Monetary Justice.

It seems that the final straw for Giles Fraser was a decision by St. Pauls to join in the legal action by the Corporation of the City of London to sue the protestors and achieve their eviction. We can expect ugly scenes in the City and huge damage to the reputation of the church, as those who are standing up for the poor against an oppressive economic system are battered and bruised on the steps of one of the nation's greatest churches.
. Tweet
Posted by Molly at 07:31