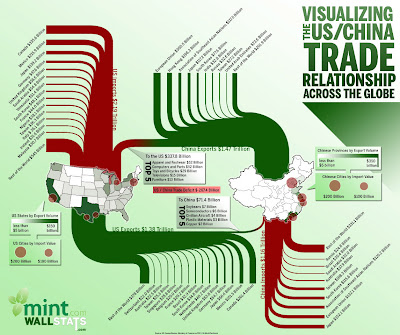 The growing power of China over the US resulting from its ownership of US treasuries, not to mention its superior productive capacity, is the driver of the currency wars that have been the subject of a series of posts of this blog. Earlier this week this power struggle took a dangerous new turn, with a bill that was accepted onto the floor of the US Senate by a big majority.

According to the Guardian website, 'The Senate bill, which does not specifically mention China, sets in motion a process for imposing punitive tariffs against a country with misaligned currencies. The bill also makes it easier for specific industries to seek higher tariffs on foreign competitors when undervalued currencies become a means to subsidize exports.'

The US it attempting to fight back against China's decision to keep control of its currency. This is of course a root cause of the under-valuation of the Yuan, but what would be the appropriate value. In a global trading system dominated by the US, its allies and the international organisations such as the WTO that they control, why would China feel any inclination to fight fair?

This is a high-risk strategy. Given that China is the US's largest creditor by far, it is only its decision to continue to hold and buy US government debt that keeps the country afloat. In a fair market the US looks almost as unsaleable as Greece, given its vast national debt and low levels of productivity.

The only safe way out of this situation is via international negotiations in which countries and their interests are fairly represented. The removal of the dollar as the global trading and reserve currency would be a necessary first step if China is going to accept an invitation to such a negotiation.
. Tweet
Posted by Molly at 11:43