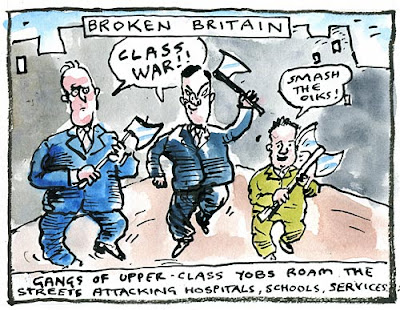 Job losses in the public sector are happening much more rapidly than predicted, which will have serious knock-on effects in terms of reducing demand in the economy as a whole, as well as reducing tax payments and increasing the amount of money needed to repay the deficit. This is according to figures from the Chartered Institute of Personal and Development and published by the BBC this morning. Put together with the misguided comments from Cameron about people reducing their credit card debt, which were later pulled from his conference speech last week, this adds to the growing sense that Conservative politicians do not understand how to respond to the second Great Depression which faces us.

An early political move by the New Ricardians was to create the Office for Budget Responsibility - a figleaf to justify their unacceptable policies. Such an Office only has a reason to exist if it can provide informed judgements about the economy that are also genuinely independent. Yet it has repeatedly produced reports to support Conservative policy, and its predictions have been inaccurate to the point of uselessness.

In November 2010 the OBR predicted that the government cuts would lead to 410,000 job losses in the public sector between 2010/11 and 2015/16, a revision downwards from the 610,000 it had predicted that June. The CIPD statisticians indicate that the original figure was correct. So why did the OBR change it? Was this to support the government in difficult political times?

The hard news for the UK economy is that the risk-averse managers in the public sector are cutting jobs more rapidly than their immediate financial situation demands, so that the number of jobs lost since the beginning of this financial year is five times what the OBR predicted. With projections as far out as that, with consequent impacts on deficit management, what is the use of the OBR?

It proves its usefulness to the government by enabling a Treasury spokesman quoted in the article to opine as follows: 'Half a million private sector jobs were created last year and the independent OBR has forecast that there will be 900,000 more jobs created in the private sector than lost in the public sector by 2015'. But if this forecast is as unreliable as the rest then it provides no basis for policy-making, just an opportunity for the spokesman to save the government's face.

It begins to seem increasingly likely that the OBR is a research unit created to provide statistically impressive but factually inaccurate cover for a government bent on its own destructive course. As such, it is itself a waste of money in these days of austeria. It should either be funded from Tory party coffers or abolished.
. Tweet
Posted by Molly at 07:37