Where is the social in social enterprise? 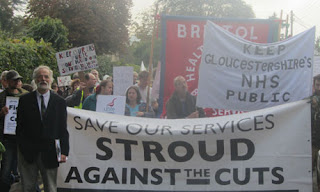 A good colleague of mine, Len Arthur, raised this question during work we were conducting into the theory of social enterprise. What we found is that is a portmanteau term: when almost anybody can claim to be one, the term itself becomes pretty meaningless.

This has become a live issue in my local community of Stroud, where the local health authority produced a plan during the summer to transfer a range of non-emergency health services to a community interest company. There was almost no consultation and what there was took place in August when most people had other things on their minds. During an emergency debate at Stroud District Council, Green Councillor Martin Whiteside produced a copy of the registration document for the 'social enterprise' he had obtained from Companies House. It indicated that there was only one shareholder: the Chief Executive of our local health authority.

Our story has now made the national media, thanks largely to the dedication of our Green mayor, John Marjoram, and the eloquence and determination of Michael Lloyd who is testing the legal process of transfer in the courts. Once local people got wind of what was afoot they were immediately activated, joined the rally, and spoke passionately in support of keeping their health services public.

So how do we answer the question with which I began this post? Again I think we do have a method for finding and answer: the useful scalpel in this dissection is made up of ownership and control. If you are being offered a social enterprise instead of a public service the questions you need to ask are: who will own it? and who will control it? If the process of being elected to the board is straightfoward and open to all, and the assets transfer to members then what you have is probably a multistakeholder co-operative and may have a good chance of providing you services that are responsive and meet your needs without extract value for somebody else's profit. If not, then you may be being handed a pig in a poke: beware of imitations.
. Tweet
Posted by Molly at 09:00