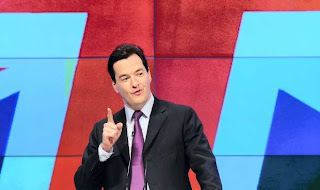 Proof that the economic crisis is still, fundamentally, a monetary crisis came during the Chancellor's speech to the conference yesterday, when he announced that he would be experimenting with another novel policy, which the policy advisors have decided to call 'credit easing'. This represents a worrying incursion by the Treasury into the realms of monetary policy traditionally reserved for the Bank of England.

You may have noticed the media pressure in recent weeks from 'financial commentators' attempting to force Mervyn King, governer of said bank and therefore the chap in charge of the nation's monetary policy, to resort to another round of quantitative easing, a policy that the media usually refer to as 'printing money' but which has actually consisted of the bank buying up a lot of corporate debt, thus making it easier for the corporates to take on more debt. Since that is the way that this form of capitalism considers appropriate to create money it is a novel but predictable response to a squeeze on credit.

It seems that King and his eight wise men of the Monetary Policy Committee (for such they are - no sign of skirt in the room when such decisions are made) have refused to put more money into the economy in this way, and so the Chancellor has found a way around this block by inventing a system of government guarantees of corporate IOUs, allowing them to issue bonds and get the liquidity flowing. Few details have been given yet, but it appears that the process of creating money through issue bonds is being privatised, with corporations now being allowed to create money in this way.

The Treasury will guarantee this process, which appears to mean the we, as taxpayers, will become entangled in the securitisation corporate debts that was the process that led to the credit crunch in the first place. With bank debts looking so dodgey, only debt backed by our obligation to work is acceptable. The problem is we have no say over who is allowed to create this debt, how they bundle and sell it, and what it is invested in. These deeply political decisions have been privatised and devolved to corporates.
.

I must confess that the arcane niceties of what is referred to in textbooks as 'open market operations' baffles my mind, but the political economy of this seems clear: the debt crisis has resulted in the sucking of money - liquidity - out of the economy at all levels. Everybody is clamouring for investment, whether in hospitals or from the corporate sector: it is a political decision that money will be allowed to be created in the private sector while the public sector will continue to be starved of cash.
. Tweet
Posted by Molly at 09:21