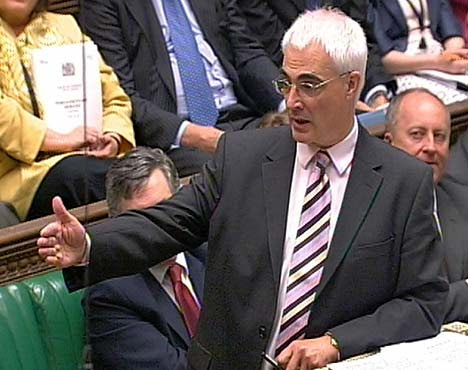 I am faintly tempted to make some sort of connection between the budget and the scrappage scheme, which might get as far as a joke if it weren't such a desperately serious business. The blogosphere is full of confident experts selling their opinions but I feel fairly comfortable letting on that I don't really know what it feels like when your economy goes bust. Perhaps we should be looking across the Irish Sea to get a few hints.

As usual the main budget stories have been apolitical and have avoided the most important issue, but tucked away inside the Guardian we find an article that tells us what the financial markets made of it. They weren't impressed. The result was an increase in the cost of insuring UK debt, which is now considered riskier than that of Spain and almost twice as risky as that of Unilever or France.

On the one hand you might be tempted to laugh this off, given that the risk is measured in terms of the very credit-default swaps that got the global economy into this mess and by the people who considered Lehman Brothers in good health the weekend before it went bust. On the other, as in all matters of economic confidence, it is a self-fulfilling prophecy, since as our IOUs become riskier they become more expensive to sell. So we have to work harder to pay off the debt that was taken on in our name, and a default is more likely.

Meanwhile, reading between the news, we find that the 'quantitative easing' programme, where the government invents money and uses it to buy the national debt, is expanding to twice the originally planned level. So it is only the sleight-of-hand process of removing some of the unwanted debt that is keeping the price as high as it is. The interesting question for puzzled economy-watchers is how long this bizarre stealing from Peter to pay Paul can carry on? And who will take the decision to call a halt to the game? Answers on a postcard, or in a comment. Tweet
Posted by Molly at 10:11