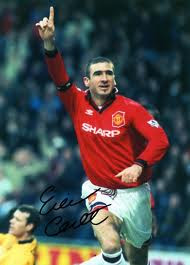 You might think that footballers would know a thing or two about money. Not only are they paid absurd amounts of the stuff, but they have also seen their game destroyed in a process of rapacious financialisation so that nothing beautiful remains. Well, ok that winning goal that Spurs scored against Arsenal on Saturday is an honourable exception.

So we can be delighted to hear from Eric Cantona that it is not complicated to sort out the global financial crisis. All we have to do is nip to the bank on December 7th and take all our cash out. This will precipitate a banking collapse: banks are the problem, so problem over.

The advantage of being French is that you can make such prognostications sound really cool and when you say 'C'est pas complique' you sound irresistible. But Eric could not be more wrong about this providing a solution to the problem. Just like in 1968, destroying an existing system is not the complicated part: it is putting something better in its place that takes the thought and effort.

I'm intrigued to see whether this money withdrawal ploy will take off like the Rage Against the Machine mass buy-in did last Christmas. Perhaps it is something about the festive season that lures us to act in a communal fashion. If it works, then Cantona may finally get himself onto a Philosophy Football t-shirt, although there will no means of buying it.
. Tweet
Posted by Molly at 10:08