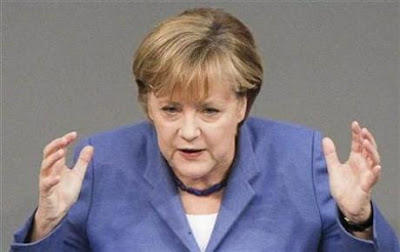 Throughout the years of financial crisis it has been notable that financial and business interests have been writing the story. Media analysts have been colluding: those who understand what is going on are in the pockets of the business lobbyists; those who do not are scared to reveal their ignorance. The result is that we are being sold a lie.

The official version of what is happening in the finance markets goes like this. Countries are in debt so they look like a bad risk. The debt of risky countries is harder to sell and so the price falls and traders need to be offered a better rate of interest to accept it. Traders will not buy it at all unless they are convinced about the soundness of the national economy selling it, so that markets demand that countries introduce austerity measures. If they are not satistifed the austerity must be made more austere.

The truth is different. As they pick on each country in turn the bond traders create a self-fulfilling prophecy. They (through the credit-rating agencies) downgrade the surety of the country's debt. Its price falls and the return they gain from holding it rises. Thus their creation of this story is a simple means of increasing their profits. They feel they can still squeeze more out of Irish debt, hence the story that the 'markets don't believe' the Irish government is secure. Once they have destroyed Ireland they will move on to Portugal, Spain and even Belgium, according to today's story. Governments in those countries tremble and beat up on their own people.

Understanding the behaviour of market traders is not difficult; devising policy to counteract it is. The process of globalisation meant the signing away of political power over economics, so even when the free operation of finance markets is clearly disastrous for the world's people politicians feel powerless. If one country acted alone they would face the massive movement of speculative money and, as Black Wednesday proved, no country or currency can withstand that.

German Chancellor Angela Merkel has been clearest about the need for political action, perhaps because she represents the strongest economy, perhaps because of the folk memory of the 1930s and the destructive consequences unrestrained finance wreaked then, perhaps because she grew up in a debt-averse Protestant home. First she called for political controls over credit-rating and now she is suggesting that the bond-holders should contribute to paying for the costs of the crises they are causing, shifting the balance of their incentives away from destroying domestic economies. These represent the first feeble attempts to reassert political authority over the globalised economy. "Have politicians got the courage to make those who earn money share in the risk as well? Or is dealing in government debt the only business in the world economy that involves no risk?" she asked on Wednesday.

Gordon Brown is short of a job these days. Perhaps the son and daughter of the church could combine their efforts in devising a plan for European governments to take charge. If he really wants to save the world, now could be just the right time.
. Tweet
Posted by Molly at 08:43