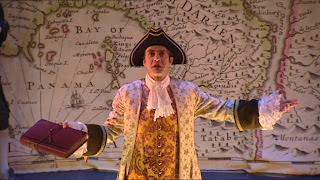 Scholars of the history of money will recall the very special role played by Scots in the financial system of Britain and its empire. There is, of course, the story of these many Scottish men who acted as colonial administrators in both finance and accounting roles. But earlier still there was the part played by William Paterson and his ill-feared Darien adventure, that bankrupted Scotland and forced the 1707 unification. Paterson had earlier been the prime mover behind the privatisation of England's national debt through the establishment of the Bank of England.

What sweet revenge it would be, then, if at this very time when 300 years of running a state through debt has reached its inevitable conclusion of bankruptcy Scotland were to cut itself free and emancipate itself from debt-base money through the establishment of its own Public Bank. This was the proposal made by Ellen Brown at a presentation to RSA Scotland last November.

If the independence vote looks anywhere close to being a 'yes' then you can be sure that there will be a mad scramble for assets, both land and cash, and desperate attempts to ensure that control of Scottish resources are not allowed to pass into the grubby hands of Scottish citizens. Controlling the Banking system will be crucial to this endeavour. To prevent this and ensure that Scottish independence can live up to its name Ralph Leishman proposed concrete proposals for a Scottish Investment Bank on the model of the state-owned Bank of North Dakota.

'North Dakota is currently the only US state to own its own depository bank. The BND was founded in 1919 by the Norwegian and other immigrants, determined, through their Non-Partisan League, to stop Wall Street money men foreclosing on their farms. . . All state revenues much be deposited with the BND by law.  . . The bank offer cheap credit lines to state and local government agencies. There are low-interest loans for designated project finance. The BND underwrites municipal bonds, funds disaster relief and supports student loans. . . For the past ten years it has been paying a dividend to the state, with a quite small population, of some $30m a year.'

Although it is hard to grasp this from our vantage-point at the heart of global capital, around 40% of the world's banking is publicly owned, with the newly emerging economies of Brazil, Russia, India and China resisting urges to privatise the issue of credit in their economies.

While the miasma of confusion about what banking is and what banks are for continues to confuse radical commentators south of the border, in Scotland the discussion of such issues as public banking in the pages of the country's national newspaper is a hint of the great opportunities for freedom offered by Scottish independence.
.