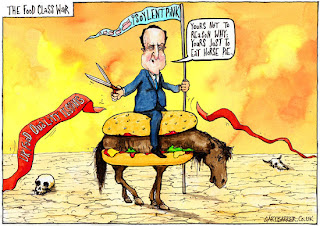 How disappointing it was to hear that the Co-operative had withdrawn products containing horsemeat that had been on sale in their stores. At least in Britain, the history of the co-operative began as a response to food contamination in the new industrial cities, so it is particularly unacceptable for the shop to undermine standards for the sake of costs and competition. It was welcome that Peter Marks was the first boss of a food company to make himself publicly accountable, but, after their pioneering role in the areas of fair trade and trenchant opposition to food contamination, we expected better from the Co-operative and have been let down.

Part of the reason I am a member of my own Midcounties Co-operative is that I am expect them to adopt higher standards in terms of the way they treat their suppliers as well as their staff. As a business with members rather than shareholders the Co-operative is able to do this, even though being part of a competitive market puts pressure on its high standards. While corporates are legally bound to maximise value for shareholders, co-operatives are obliged to meet the standards required by their members.

This is one of many reasons why I have been involved in supporting co-operatives for the past decade, both through my own economic decisions and through undertaking research and publishing articles. I am now working as part of the Co-operative Commission set up by the Welsh Government. It has a wide remit: to find ways to strengthen the co-operative economy in Wales on the basis that a co-operative economy is more socially beneficial than a capitalist one. We will also be exploring the potential for taking mutual models into the realm of services currently provided by the public sector.

The Commission recently launched a call for evidence. What would be particularly useful is ways that political authorities in other countries have found ways to support the sector. Given that autonomy and self-help are guiding principles of the movement it is not always easy to see what role politicians can legitimately take, but many countries offer fiscal advantages to co-operatives on that basis that they achieve positive social outcomes. If you have examples of such policies please do respond to the call for evidence.
. Tweet
Posted by Molly at 07:49