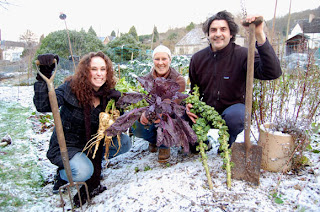 In another quirky twist it turns out that the first identified source of horseflesh in the UK is in the Yorkshire town of Todmorden, which has thus far been famous for the community food growing project known as Incredible Edible Todmorden. Since the relevations that the FSA have found horse meat on the premises of a local abattoir there has been another round of reflection on how to inspect an regulate and increasingly complex food supply chain.

Since the BSA and salmonella scandals in the 1990s there have been periodic kerfuffles about where on earth our food comes from. In the academic literature the word most often used is that of 'provenance', which led to the food of origin appearing on the food label. But labelling is an inadequate response to consumers who wish to understand the provenance of their food, and not only because an abattoir that is capable of passing of horse as cow is hardly likely to be concerned about which farm the horses came from. To understand the deeper level of our connection with food we may need the French word terroir, a sense of the cultural connection with local soil expressed through food as well as other forms of folk culture.

Here is how I describe this connection in my book, The Bioregional Economy:

'The Gloucestershire love of apples is an example of what the French would call an attachment to terroir, the sense of pride in your local place and its specialities that could be taken as constitutive of a bioregional approach to provisioning. The contrast with a globalised market approach to provisioning is instructive. While the market economy needs global uniformity and standardisation, the bioregional economy revels in difference and local distinctiveness. The word ‘terroir’ comes, of course, from the word terre meaning land and it is this attachment to land, your local land, as expressed in the particular products it is suited to producing that lies at the heart of the ability of a bioregional economy to enable a process of environmental re-embedding.'

Of course buying local from farmers you know and, if you are not a vegetarian, eating animals that you have seen grazing in local fields, also offers immediate practical reassurance that you know what you are eating in a way a labelling system never can. For more on the delights of local provisioning in the Stroud Valleys please visit the beautiful blog Let Them Eat Hay by doyenne of the local food movement Helen Pitel.

So why have we moved from this satisfying local provisioning to a world of complex supply chains where regulation is virtually impossible? The answer is obvious: it increases the ability to extract value for the food corporations, which has also undermined the livelihoods of farmers. In a report from Green House thinktank published today, commodities expert Thomas Lines describes a world crisis for farming, a crisis of reduced agricultural incomes, and an ageing farming population. The author argues that a new approach is needed, building on known methods – a greater variety of staple crops, traditional farming techniques and agro ecology – to create a food system which is economically as well as ecologically more resilient and sustainable. His recommendation to farmers and growers north and south is that they should get themselves out of the market system and focus on providing good quality food for local markets.