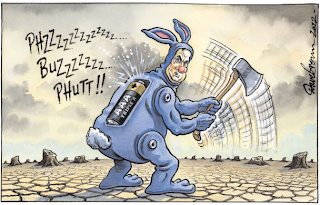 What are we to make of the downgrade of the opinion of UK debt by credit-rating agency Moody? The chat on the airwaves is all about the politics of the decision. As noted by the Guardian last night, 'The chancellor has used maintaining the top credit rating for government bonds as one of the key arguments for the austerity programme.' So are we likely to see the flags out to celebrate the end of austerity? I think not so long as we allow vulture financiers to suck the life out of our economy, the process for which credit rating is just a sideshow.

The credit-rating agencies invented a profitable business for themselves by taking the responsibility for assessing risk on behalf of investors. My own local council, for example, is advised by the local authority financial advisor Sector, to only place its reserves in funds with triple-A ratings. This avoids the need for us to employ our own financial experts and outsources the risk if we make bad investments. The credit-rating agencies were paid handsomely for carrying this responsibility, although at no real risk to themselves.

The fear that was engendered around the loss of the triple-A rating relates to how this measure of risk relates to the cost of national borrowing. If Moody and friends decide that we are at greater risk of defaulting on our debts then investors will expect to be paid more for lending to us to reflect this risk. The cost of our borrowing would rise, and given its vastness relative to our economic output we might teeter closer to being obviously and publicly bankrupt.

So why have the rates barely changed in the market this morning? The answer is that the credit-rating agencies never had the power they claimed for themselves. Investors have taken on the chin the downgrades of the US and France. They are not interested in some end-of-term report but make their own assessments of how they can make the greatest return. Investors believe that UK gilts are a good investment because they believe that UK citiens will make good on them through their work.

Taking a wider perspective we can see that what has happened has been a change of cast: the credit-rating agencies that were used to bully us into unprecedented cuts to pubic spending have lost favour, but the policy continues. The real question for us should be whether we are happy to continue with a  means of funding our national economic affairs that accepts that a proportion of our wealth will be constantly siphoned off to financiers. This is the reality of debt financing and the performance around triple-A rating is the show that conceals the very real decisions investors are making about which country's citizens and resources will yield them the greatest returns.
. Tweet
Posted by Molly at 09:01