For years leading up to the financial crisis it was obvious that the money within the economy was being misallocated. A tiny elite were managing to control most of the finance and were constantly and rapidly reinvesting it in ways that could make the largest and fastest returns for them. This led to inequality within and between nations and had devastating consequences for our health and our social well-being.

But the misallocation of capital has also destroyed the ability of the economy itself to function. Although I resist cultural explanations for the financial crisis, whose origin was political, the attitude towards money amongst those who consider themselves entrepreneurs is a significant part of the explanation for the continuation of the banking and financial crisis. The whole notion of money being used as a facilitator of economic activity has evaporated as 'investors' have come to understand their role as only one of accumulating profits for no effort. The irrational expectation of vast returns for no risk is now preventing the normal mechanisms of a capitalist economy from operating. 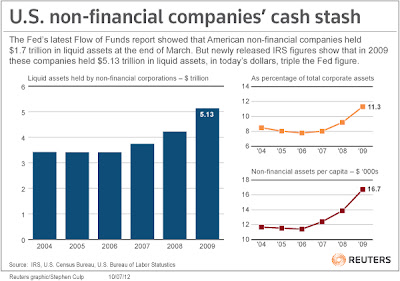 At the level of firms this is being demonstrated by the unprecedented hoarding of cash by corporations. During the good years companies learned how to make large profits but they did not learn how to spend them: the process of globalisation and weak power by labour unions enabled companies to achieve unfeasibly high margin. Now that times have changed they are refusing to reduce these margins but they are nervous about investing the cash. More importantly, their expectations about the sorts of returns they might expect for their investments are what economists would call 'sticky'--they have not changed in line with the vast changes in the economic environment. This has led to a situation where British businesses were holding as much as £750bn in deposits, around two-thirds of it in cash. The Reuters graphic shows the situation in the US, where this issue is the subject of considerably more debate than in Europe.

There is, of course, a simple expedient to resolve this problem. Just as the government should use the power it has through owning two of our largest banks to ensure that they lend into the productive economy, so the Treasury should create incentives for companies to spend rather than hoard cash. A new capital tax proportional to reserves held should do the trick. It would encourage companies to spend their own money, but allow the government to spend it in the interests of the citizenry if they refuse to.

For long years the problem of our economy has not been that there is not enough cash around but rather than it is in the wrong hands. As the political authority governments have the power to address this, but their decade-long ideology of impotence is preventing them from doing so. Meanwhile the politics of austerity grinds on, punishing the poor and crushing life out of the economy. On the private and public side those in power, wedded to an anachronistic understanding, are sucking money out of the economy and ensuring that the slump continues.
. Tweet
Posted by Molly at 07:28