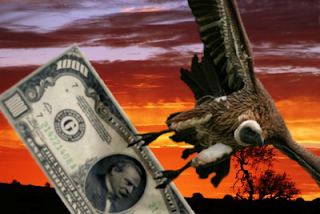 With so many countries facing insolvency and only managing to pay their creditors by introducing destructive and unpopular cuts to vital services, the issue of how far the rights of corporate creditors extend into the realm of political authority is increasingly being tested. The institution of 'technocratic' (for which read anti-democratic) regimes in Italy and Greece was an initial indication that democracy would be sacrificed to the interests of global financiers. Argentina is the next test case.

Following its default in 2001 the majority of the country's creditors accepted a sizeable write-down on their investments. They had taken a risk and it had gone bad; they took the rap and moved on. But a minority held on to their bonds and sold them on to so-called vulture funds. These are financial funds who buy up such apparently worthless debt and then use aggressive means to force repayment. In this case, as explained by the Jubilee Debt Campaign, 'The vulture funds speculated on Argentina's crisis, buying debt in the hope that the country would go bankrupt, and refusing to join the vast majority of Argentina's "creditors" in negotiating a reduction in the value of their debt (even though they only paid a fraction of the value of it in the first place).'

The seizure of the Argentinian warship the Libertad in a Ghanaian port in October last year was a dangerous escalation in the activity of these vulture funds, with echoes of the exploits of the US filibusters in the 19th century. These privateers roamed across Latin America with their privately funded armies, creating mayhem and extracting resources at the point of a gun. The vulture funds now use US courts but the objective is the same: to subvert the sovereignty of national governments to the advantage of the US holders of capital.

The appeal that will be heard next Wednesday 27th in a New York court between the Argentinian government and the vulture find NML is a crucial stage in the struggle between democratic authority and corporate power. Last November a court in the same city ruled that Argentina must pay the face value of the $1.3bn debt to NML, a subsidiary of the hedge fund Elliot Associated. Please take whatever action you can to oppose this oppression by the interests of capital. The Jubilee Debt Campaign is organising a noise event in London you can also sign the petition supporting the government of Argentina.
. Tweet
Posted by Molly at 15:38