Power to Which People? 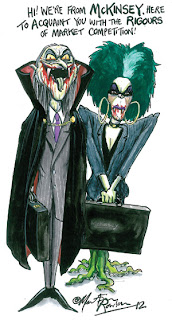 After years of claiming that resources were plentiful and that human ingenuity would find a way to replace those that were becoming exhausted, the capitalist elites have changed their tune. The McKinsey report Resource Revolution, which has already been discussed on this blog, was a clue to the shift in focus away from finance and towards resources, and today's ReSource conference in Oxford is part of the trend. The rich and powerful are lining up to ensure that they protect the unfair share of the earth's resources that they enjoy. Now that the finance scam has fallen apart they are adopting more direct strategies.

The clue is really in the doublethink of the conference title: 'Food Energy Water (for all)', just as the clue to the failure of Rio was in the deceptive title 'The future we want' rather than 'The future we want you to have'. The breathless publicity tells us that 'great thinkers and leaders' will converge on Oxford (where else?) and 'From politics to philanthropy, from the arts to the military, from business to academia, ReSource brings together the best in their fields'. Whether these people are representative of the world's population or representing anything other than their own self-interest is not questioned. These are global power players making decisions, economic decisions, about how resources will be allocated.

The conference is hosted by the university's Smith School of Enterprise and Environment and, in case you were sceptical about my claim about the link between resource control and finance, funded by the Rothschild Foundation. As nature proves to us daily that the scale of our economic activities threatens our future, those whose power depends on the existing economic model are using their considerable resources to manouevre themselves into a dominant position within the new paradigm. Having lately accepted that there are limits to resources, they now move to suggest that private interests are best placed to make decision about how those limited resources should be shared. This will ensure efficiency, we are told, while equity concerns are sidelined and the question of the appropriate forum for decision-making is entirely off the agenda.

On the green wing of the economics profession it has been an assumption for several decades that limits to growth must be taken seriously, the the earth's resources are limited, and that once we acknowledge this then we must move straight along to raise the question of how we decide a just and inclusive mechanism for deciding the allocation. This is at the heart of my proposal for a Bioregional Economy, which includes the suggestion that a participatory process of decision-making is vital to decide how we share the resources within the planetary boundary. The ReSource conference has entirely the opposite motivation: its very structure makes clear that the future sharing of the wealth of the earth is being decided by unelected elites in closed session.
. Tweet
Posted by Molly at 10:02