Sources of Critique and Hope 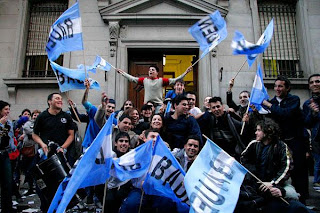 My friend and colleague Barbara Panvel has been doing an excellent job, sharing information about government corruption, the recent action by farmers defending their livelihoods, and the need for shared ownership. She also co-ordinates a group of like-minded researchers in the New Era Network, of which I am a part. Today she announces the award of the Goi Peace Award to Network member Helena Norberg-Hodge.

On her 'political clean-up' blog on 15th July Barbara asked why the media story about the award of £10m. to the John Innes Centre to develop GM maize failed to mention the £45m. of public money that is being invested in the same project.  The Centre receives more than half its financing from the public purse, and yet private-sector interests are now determining the focus of its activities.

Way back in 2007, Barbara, a keen reader of the Farmers' Weekly, was already reporting on the devastating effect the supermarkets were having on farmers' livelihoods, an issue that is finally reaching public attention.

On her 'antidote' site she reports on the Bauen Hotel in Buenos Aires, recuperated by its employees in 2003 and still going strong:

'The hotel (video link) now has 150 workers, a street-side cafe selling many products produced by other worker-owned shops, and over 200 renovated hotel rooms. The co-operative makes its decisions collectively at assemblies of its 142 staff, pays all workers the same basic $800 (£540, €650) a month (with just a few incentives, of less than $100, for length of service, timeliness and for staff handling cash, for example) and prides itself on its alternative management philosophy.'
.