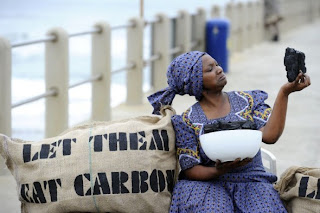 The Joseph Rowntree Foundation is to be congratulated on funding a range of research programmes that tackle head on the justice aspects of climate change. It is clear that within a market framing the wealthy can respond to carbon taxes or rising energy prices by changing their spending decisions; it is the poor who could suffer significant threats to the quality of life, and even their health. Those on fixed or falling incomes, especially the elderly, may not survive if they are forced to cut their fuel bills and not supported with energy-efficiency home improvements.

I already blogged about an excellent piece of work by Thumim and colleagues at Bristol University which explored the relationship between wealth and carbon emissions. Another piece of research under the same funding programme and carried out by the Fabian Society has recently been published: this time the focus is public attitudes to climate change and justice. The researchers challenge the policy focus on individual behaviour change and the emphasis on a consumer paradigm. They suggest that communitarian motives may be more effective in changing behaviour in pro-enviroment directions.

The most important findings were that:
Unsurprisingly, the researchers also found that they were unwittingly involved in 'action research', that is to say that the research itself changed the attitudes for the members of the focus groups, who became more concerned about climate change and more supportive of environmental policy as a result of discussing these issues in small groups. This flies in the face of the emphasis on individual behaviour change and the politics of nudge that, together with the commodification of nature, is the main focus on official policy for the environment.
. Tweet
Posted by Molly at 09:14