The strange paradox of the UK economy post-2008 is that figures for output and figures for employment do not match. While the numbers that measure the actual output of the economy look disastrous, and increasingly so, the story on jobs is that many more of them are being created. The level of employment in the economy as a whole is up by 159,000 jobs in the 12 months to May. Even allowing for the fact that many of these are part-time jobs, this is still an impressive performance for an economy in deep recession. While the unemployment figures illustrated in the graphic are less encouraging, and show a clear divergence between the claimant count and the actual rate of unemployment, this still doesn not look like an economy suffering the worst downturn on record. 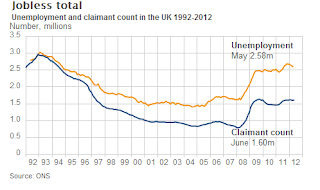 Part of this is undoubtedly resulting from the sorts of social factors that economic statistics can never capture; employers protecting their staff, perhaps because they value their skills or perhaps because they know their children; people protecting each other, even though there is not really enough work for them to do. The rhetorical attacks on the unemployed and all those who seek social support in times of crisis has also undoubtedly led many of those who are functionally unemployed to assign themselves to a range of more acceptable social categories, of which self-employment is the most popular.

On the other hand we may be observing what economists like to call a break in the trend, a historic shift in the relationship between some of the fundamental economic variables. One aspect of the change is the shift in the focus of productivity away from financial services and towards real economic output. After all if the financial sector is famed for creating money from thin air, a relatively labour-light process, then we cannot be surprised if the value-to-weight ratio of the economy is lower since that sector has massively contracted.

As in the case of the ending of growth, this may be another sign that the economy is already in transition towards a more sustainable pattern. If one of the features we are expecting is the rehabilitation of manual labour then we would expect to see a shift in the balance of productive assets away from capital and towards labour. This trend will speed up rapidly as we approach the exhaustion of fossil fuels or their prices rise as we begin to take climate change seriously. Perhaps the job generation that we are seeing now is already an indication of the green economist's claim that a green economy will be an economy that creates jobs.

This paradox is, in reality, not much of a paradox at all, but rather another indication that the way we measure our economy is not rational. If we had always measured output that really generated well-being, rather than counting money and counting jobs, we would have been able to formulate policies to reinforce what we value. This shift away from accounting to true economics could be one of the best outputs from this period in our economic history, which, in its own way, is proving particularly productive.
. Tweet
Posted by Molly at 09:55