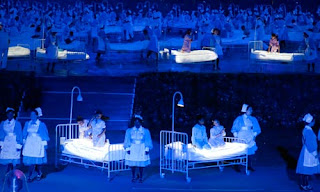 In many ways the economic organisation of the Olympics can read read as symbolic of the organisation of late capitalism as an economic system. London has been hollowed out as its wary residents leave town to holiday in the country, or leave their own country altogether. The city that they call home, and whose riches they generate, has become the playground of an international elite. Those attending the games are profligate financially and in carbon terms, jetting around the world for hedonistic pleasure.

There will be spectators, but in global terms all will be rich, since no tickets are available within the price-range of the average global worker. Londoners have lost their city, their roads, their buses, their tube stations - even, as pointed out in an earlier post, their language. Rather than an economic opportunity, white-collar workers have been encouraged to 'get ahead of the games', which without further advice than walking to walk is surely encouragement to skiving on a massive scale. Small-scale entrepreneurs, on the other hand, are excluded from economic opportunities by the mother of all restrictive practices that the Olympic contract itself embodies.

At this stage in the games, the costs are guesses and probably deceptions. The 'round number' for the cost of the games is £9bn. Contributions from sponsors is known but secret: the Guardian has produced its best estimates as to how the suggested £1bn. total breaks down. What is clear is that, although most of the economic value arising from the games will be enclosed and extracted by the corporate sponsors, it is the people of the UK who will pay the majority of the cost. So just as we subsidise the roads that enable Tesco and their ilk to drive their goods from underpaid producers to overfed consumers, so we pay for global marketing opportunities that are then exploited by a narrow range of global corporations.

While such a message could hardly for the basis for a national pageant, the economistic approach to life was wonderfully subverted by the opening festivities. We, the citizens of the world, have utterly lost control of the economic sphere, and yet without our culture and creativity life would be meaningless even for the elites who extract the value of our work and control increasingly more aspects of our lives. This was the hugely powerful message of the opening ceremony, because it is surely the political message of both Danny Boyle and Stephen Daldry. They read our history, as I do, as a history of struggle and the triumph of humanity over economic oppression.

They had skilfully included the aspects of British culture that truly make us proud, particularly our self-deprecating humour and our favourite national institution the NHS. Before the TV transmission began, Boyle had dedicated the performance to the volunteers who made it possible, the people who worked without being paid, who he called 'the best of us'. In a games that seems more obviously controlled by corporate interests than any before, that is the message we must hold on to.
. Tweet
Posted by Molly at 09:00