From Democracy to Plutocracy 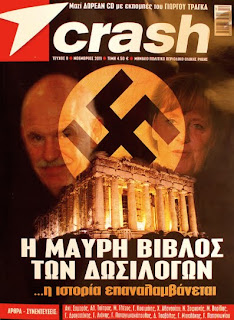 Davos is over: the corporate power-brokers have returned to their notional national boundaries and their over-priced lives, leaving the rest of us to struggle through the disaster that their version of a global economy has bequeathed to us. More than anything else, this annual ritual of the wealthy on the piste makes clear where real power lies in the 21st century world.

It is in Greece, however, that we will see the battle for power, the battle between the ideas of democracy and capitalism, fought out in the coming days. The struggle for the future of Greece is too symbolic to be other than a cosmic joke: the origin of the word 'democracy' becoming the site of its demise. Although since Athenian democracy vested power in the hands of a tiny elite supported by slaves may mean that it is apt that it is also the backdrop for the global challenge to a system of rule by the people for the people.

The decision by Brussels that Papandreou should not be allowed to hold a referendum, followed rapidly by the replacement of democratically elected politicians with bankers, and the agreement reached by 26 EU members that they would allow unelected European officials to control their domestic economic policy have all made clear that the interests of finance are taking power away from the people who vote and the politicians they choose.

Over the weekend the German economy minister Philipp Roesler took the dangerous next step along this path by proposing that Greece should explicitly give control of its economic policy to European bureaucrats. This is just a natural extension of what happened in Marseilles and might be a threat that is coming the way of other countries soon. In spite of its historical resonance it is not the fact that this proposal was made by a German that matters, but the fact that democratic politicians are to be replaced by technocratic lackies of the financiers.
. Tweet
Posted by Molly at 11:40