Squandering the Wealth of Life

In the immediate aftermath of the 2008 financial crisis, Bank of England staff attempted to estimate the financial costs to the UK economy. In 2009 Andrew G. Haldane, Executive Director for Financial Stability at the Bank estimated that the permanent loss to the UK economy from the banking crisis was anywhere between £1.8trn. and £7.4trn.

The softer, less measurable, more human consequences are only just now becoming clear. A paper in the Lancet in July 2011 began to measure the impact of the 2009 crisis on health, and specifically on suicide rates. Economic crises unsettle people in various ways, but the most obvious, pressing and observable is the loss of employment, which quite literally kills. The authors of the paper considered the pre-2004 EU members and the more recent members separately. 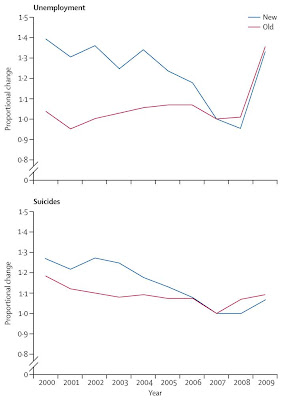 The graphic from the paper reproduced here compares unemployment rates amongst adults with rates of suicide across the EU. Unemployment began rising rapidly in 2009, with a 35% increase over 2007 levels. Shockingly, however, the increase in suicide preceded this, suggesting that it results from fear of unemployment and general rise in anxiety as a result of the instability caused by financial shock. As the authors conclude:

‘the steady downward trend in suicide rates, seen in both groups of countries before 2007, reversed at once. The 2008 increase was less than 1% in the new Member States, but in the old ones it increased by almost 7%. In both, suicides increased further in 2009. Among the countries studied, only Austria had fewer suicides (down 5%) in 2009 than in 2007. In each of the other countries the increase was at least 5%.’

The fact that it is fear and uncertainty that causes suicide, as well as the reality of unemployment and poverty, indicates the irresponsibility of the Coalition strategy of creating an aura of austeria in order to make it easier to impose their draconian cuts. This undermining of social confidence can itself cause increased rates of suicide, which are only a marker of more general social dis-ease.

Greece gives us an indication of the future for the people of Europe if these desperate austerity measures are continued, a policy that Cameron recently argued for at Davos. Official statistics for that country indicate a 40% rise in those taking their own lives between January and May of 2011. Studies of rapid social change repeatedly indicate that the increase in uncertainty and the fraying of the social fabric are not only politically dangerous but also very destructive to human life and health.
. Tweet
Posted by Molly at 08:30