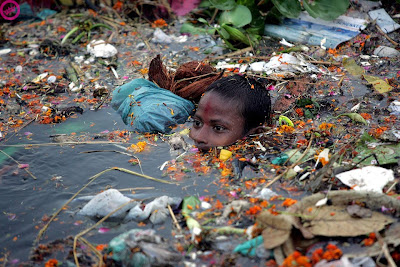 The indifference of the Metropolitan Police to the murder of Stephen Lawrence rightly led to private soul-searching and public examination of procedures, and we have to hope that our country and particularly our police service is better as a result. But there is a more insidious form of racism that goes unquestioned and causes the death of far more people. This is the racism of an economic system that values the lives of the poor differently from the lives of the rich.

According to a recent blog post, such an attitude was subscribed to back in 1991 by Larry Summers, tipped to become the boss of the World Bank, and therefore one of the most powerful people in the global economy. According to the totally undemocratic procedures by which the global financial institutions are run, the Europeans choose the head of the IMF while the head of the World Bank is a position virtually in the gift of the US President, and the rumour is that he is thinking of giving the job to Summers.

US blogger Doug Henwood cites a memo issuing from Summers's office back in 1991, when he was the Bank's Chief Economist. The memo explains why Africa is seriously under-polluted and argues for the Bank to encourage highly polluting industries to move to Africa because this would be so much more efficient. The efficiency arises from the fact that paying compensation for the deaths of Africans is so much less costly than paying for the deaths of US citizens.

The author of the memo writes that 'I think the economic logic behind dumping a load of toxic waste in the lowest wage country is impeccable and we should face up to that.' The argument is that should there be a claim for damages, the costs would be based on the economic value of the people who died, that is to say their potential lifetime earnings. Since Africans earn so little their deaths would cost polluting companies relatively little.

In spite of the morally outrageous nature of this reasoning, and the blatant racism that lies behind it, this sort of costing of human lives is fairly routine amongst neoclassical economists. A seminal paper in the field cites that value of human lives, based on earnings potential, as ranging between nearly $10m. if you are Canadian to a mere $0.8m. if you are South Korean. The African countries favoured for pollution dumping by Summers and his ilk do not have enough money to invest to be part of these studies.

The estimates vary widely, suggesting that the methods as well as the morality lying behind these sorts of studies is grossly unreliable. Yet it is on this sort of basis that decisions are made about the siting of factories and the disposal of the noxious effluent of Western lifestyles. Those debating the future of capitalism should take note: the challenge to values needs to run much deeper than merely questioning relative wage differentials in the wealthy economies of the West.
. Tweet
Posted by Molly at 16:04