Clegg Stuck on the Capitalist Fence* 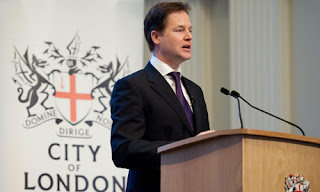 As we seek to find an alternative to the discredited corporate capitalist model of enterprise it is vital that we understand clearly the range of options on offer, which is why Nick Clegg's confusing statement about the John Lewis economy is particularly unhelpful.

John Lewis is a company without shareholders, whose value is vested in a Trust and can only be shared between the company's employees. This is quite distinct from a standard corporation which allows its employees to buy some of its shares while its management is free to inflate profits by risky endeavours or extract value in bonuses. While John Lewis employees receive a share of the profits they generate, employees of share ownership schemes might find, like the employees of Enron, that they lose not only the value they created but also their jobs and their pensions.

Understandably, those who currently profit from others' work via their share ownership are nervous about the suggestions that workers might keep all the value of their work themselves. The response to Nick Clegg's speech from the Financial Times includes the expression of these views from the side of capital, skilfully woven in with the completely distinct anxieties expressed by Charlie Mayfield, chair of the John Lewis partnership.

Unsurpsrisingly, most of the discussion entirely avoids considering the option of a full-scale co-operative business, where risks and rewards are shared between those who work in the business, who are also its owners. The suggestion that workers might own and control their workplaces is part of the real alternative that may not be articulated. Whether we look to the Basque Mondragon Group or our own Suma Wholefoods co-operative we see a model that is stable, sustainable and just: a model that could form the basis for a national economy we could all buy into.

*An edited version of this letter was published in today's Guardian.
. Tweet
Posted by Molly at 12:20