Answers Still Blowing in the Wind 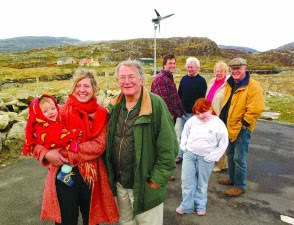 Technical reports about wind-power present a classic picture of statisticians dealing with the unpredictable. Aside from a helpful opening sentence in a BERR advisory note informing us that 'The UK is a very windy country' and a range of pseudotechnical concepts, it is hard to get accurate figures about how much of our electricity could realistically be generated from windpower. But what is fairly clear is that we have a lot of wind 'resource' availabile and, because we have a large Atlantic coast, the wind blows relatively more consistently here than in Denmark and Germany, which both have considerably more installed capacity than we do (Germany has 16.2% of the global total compared to our 2.6%).

This year's annual Ethical Consumerism Report indicates that spending on most areas of fair trade and ethical goods shows large increases (organic food is the exception), but the report's funders Co-operative Financial Services identify renewable energy an example of area that has 'failed to make significant progress'. So what is holding us back, and what can be done to break through these barriers?

Assuming that we are not going to have a government that will see this as an opportunity to create jobs and reduce our carbon impact and thus provide state investment to the sector, we will have to rely on a combination of good will and financial incentives. So in order for this market to take off we need what a technologically constipated economist might refer to as a 'triple coincidence of incentives'. We need the right sort of wind (fairly consistent and not gusty), where people consume large amounts of electricity and where there is spare capital for them to invest in the hardware.

In an earlier post I argued that the main hurdle to be overcome - the resistance of local communities to 'unsightly' windfarms in their vecinity - could best be addressed by a co-operative model but it seems that, even with the generous terms currently available via the feed-in tariff, we still do not have the right model to garner sufficient support to see the response from local communities that would enable us to match Germany's capacity over the next five years or so.

One disincentive for local communities is that cost of the environmental reports needed to get a planning application on its way, when the possibilities of success are still unknown. This might amount to £40,000 or so that must be found from local small investors, who may just be throwing their money away. What we need is a group of Public Interest Planners who can afford to do this work pro bono and, where this is relevant, provide templates for the parts of the reports that are not site-specific. A Community Renewable Energy Toolkit for England and Wales, along the lines of that already produced by the Scottish government, could also help the process.

But rather than knowledge or expertise it may be the financial engineering that is most necessary. On this front, I heard an interesting pitch recently from Tim Helweg-Larsen, formerly of the Global Commons Institute and now at the Public Interest Research Centre. His model, called the Energy Bank, connects well-intentioned investors with local communities in windy places, at least achieving a double coincidence. Whether this turns out to be more successful than the payments offered to smooth the path to planning permission in reluctant communities remains to be seen.
. Tweet
Posted by Molly at 13:38