Putting the 'n' into Tories 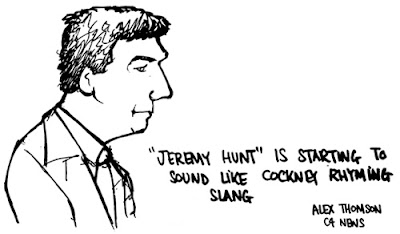 With Christmas approaching I have thought of a new party game. Well, ok, it was really Jim Naughtie's idea, but why not claim the credit since he seems somewhat embarrassed about his creativity?

What we can do, which is sure to cause more of a warm glow than those awful cracker jokes, is to find genital substitutes for the names of the Tory cabinet ministers. David Cameron has been so helpful here by choosing the phallic Mr Willetts and by appointing Mr Hunt to the Culture Department. Willetts can actually be mistaken for two titillating organs, since according to that lexicographical bible Krek Waiter's Peak Bristle in the South-West it is the popular name for the female breast.

Other examples of cognomen syndrome gratefully received. Tweet
Posted by Molly at 10:49